Review: Written on My Heart by Cole Gibsen 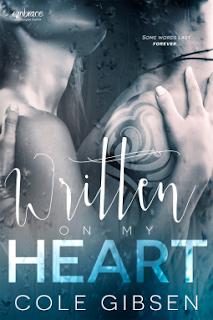 "We can agonize this forever, Ash," Lane says. "We can dissect every possible outcome and brace for the worst. A million things can go wrong--I know that. But we only need one thing to go right. And we're right, Ash, the two of us together. I can feel it. I'm not perfect, and I know this won't be easy. But I'm willing to take a chance if you are."


Twenty-year-old Ashlyn Daniels may be physically free after years of suffering the abuse of her stepfather, but she still bears the emotional and psychological scars. She's barely making enough to cover her rent and basic needs and she's wary of people, but when her co-worker suggests that covering up an old tattoo of her ex-boyfriend's name with a new one would be like getting a fresh start, Ashlyn reluctantly agrees, especially since it'll be a free tattoo. And then she meets the brooding but talented tattoo artist who just happens to be her co-worker's brother and he sparks something new, confusing, and unexpected in her.

Twenty-six-year-old Lane Garrett made a foolish choice ten years ago and it taught him a valuable lesson in life. Nothing will ever come before his family and he takes his responsibilities very seriously. Life is about them and his art, which he expresses in ink on the skin of his clients. When his sister brings in her new friend to get a free tattoo cover-up, he grumbles and complains but he also can't help but notice this slip of a girl who has a haunted look in her eyes. He knows the best thing to do would be to keep his distance from her, but he's drawn to this who's got her share of secrets even as he keeps one from her.

I appear to be on somewhat of a roll with as far as reading choices go because I seem to have hit some sort of jackpot, going through one amazing book after the other these past few days. I don't give five-plus stars lightly, and while not everyone may share my enthusiasm toward several books, my ratings and reviews are based on how a book--its story and characters--affects me overall. This is my first Cole Gibsen read and it hit me in all the right places. It made me feel for the lead characters, their life experiences, and what kind of tomorrow is waiting for them. It made me think about what Ashlyn Daniels and Lane Garrett went through as individuals and what they had to face as a couple and what I would do in their shoes. It made my heart squeeze in empathy and me sigh in happy satisfaction by the time I got the end of this love story.

Ashlyn Daniels was the victim of abuse and was thrown out of the house she shared with her abuser of a stepfather and her mother who did nothing more than make excuses for her husband's actions. I couldn't help but flinch when Ashlyn would experience this gnawing fear of being punished for any sort of spill or mess, even though she was no longer living at home. That's the thing with abuse: its effects are long-lasting and life-altering. Meeting people like brother and sister Lane and Emily Garrett helped Ashlyn begin to see that maybe it was possible to begin to trust other people and that they wouldn't see her as the person her stepfather claimed she was. Lane himself was dealing with results of something he had done at sixteen, making him responsible but overly protective of his family and slow to trust anyone outside of that family.

It's no secret that I love dogs and a dog in a story that's used for more than decorative purposes is always a bonus for me. I adored Hank and couldn't help but go "Awww!" when Ashlyn came to certain realizations of being able to learn to say "I love you" because of the four-legged cutie. And then, of course, there was Harper who was such a game changer in the story, and while I did suspect that she was who she was very early on, that knowledge never diminished the experience for me because she wasn't a simple complication in the story but much more. With a tale of survival, redemption, and finding and accepting love when the time is right and with the right person, Written on My Heart is new adult standalone romance that I would heartily recommend to anyone. This is a new addition to my list of 2015 favorites and gets five-plus stars. ♥

Pre-order Written on My Heart on Amazon | B&N | Kobo.