Review: The Single Game by Amanda Black (The Apartment Novels #3) 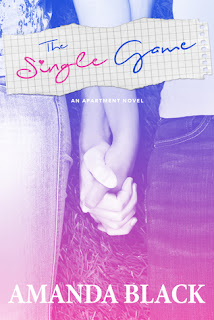 Note: This ARC was provided by Full Fathom Five via NetGalley in exchange for an honest review.

The Single Game is the third novel in the Apartment series from author Amanda Black but can be read without any previous knowledge of the first two books (which were among my top favorite reads for 2014). The female lead character is Eden Foster and she's the daughter of Eric and Maggie Foster and the niece of Ethan and Lily Foster, whose own love story was told in The Apartment and The Blank Canvas. Eden is an eighteen-year-old girl who, after discovering her boyfriend and best friend were sleeping around, finds herself living in a new town with her parents and starting her senior year at a new school.

After weeks of acclimating herself and finding new and better friends, Eden decides it's time to start dating again but doesn't want the kind of guy that she used to fall for. She and her best friends come up with a checklist and once she finally notices her very shy and very quiet lab partner, Logan Black, she begins to see him in a whole new light. The thing is, she isn't even sure he likes her since he barely says a word to her. Their friends take matters in their own hands when they invite Eden and Logan to a basement party that has interactive games that have one very particular qualification: the participants have to be single.

Both Eden Foster and Logan Black may be high school seniors, and there are definitely some sweet and cutesy moments between the two, but there's a lot more steam than you would expect to find in a regular young adult (YA) novel. I'm at the age I am, so all the sexual activity that goes on between Eden and Logan didn't bother me one bit. Plus, if we're being totally honest here, countless teens already know about the birds and the bees firsthand. Just don't go into this thinking it's a YA novel because it's not and there are more than the innocent hugs and kisses and flirtatious glances exchanged between the lead characters.

I liked that this book has that element of erotica but with both Eden and Logan being eighteen-year-old individuals. Pretending that a lot of teens their age don't engage in the things they get into here would be blissful ignorance and I'm glad that an author like Amanda Black took a risk by writing this story. It was also interesting to have Eden be more experienced than Logan and I think that's what helped to make their love story feel more sincere and real. Eden's relationship with Logan was different from her previous one and they were both more than ready to discover new things about themselves and about one another.

This was a lighthearted read and one that I enjoyed. Yes, it isn't anything like The Apartment or The Blank Canvas but it set itself apart in a good way with two lead characters that endeared themselves in totally different ways and a story that was so much more than I expected. With this latest book, I can happily say that I've loved everything that Amanda Black has ever had published. I'm certainly curious as to whether there'll be another book added to the series or if she has something else in mind. Either way, I'll be eagerly anticipating what she's got next in the pipeline. For now, I'm going to give The Single Game five stars. ♥