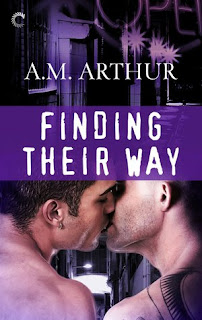 It's been five years since Riley McCage left his abusive father and his old life behind. He's now got a stable job and a boyfriend he really cares about...until said boyfriend drugs him and tries to forcibly have sex with him at a sex party. When Riley is rescued by Donald "Boxer" Boxwood, it's the beginning of a friendship that neither one expected but both needed. They've both just come from long-term relationships that ended abruptly, so neither is looking for commitment. However, the attraction between them grows stronger the longer they try to deny it and soon they become more than friends. With Riley's past threatening to bring his secrets to light, can he and Boxer trust each other to find their way to love?

Finding Their Way is the second book in the Restoration series from one of my favorite M/M authors, A.M. Arthur. This story is about Riley McCage and Boxer Boxwood, two men who find true friendship and love with each other when they least expect it. Riley's childhood wasn't an easy one at the hands of his father and when he admitted he was gay, he was kicked out of the only home he knew. He goes through what he feels are necessary steps in order to start over and five years later, he's created a life for himself. His past comes back in a way that you see coming if you're familiar with the story and supporting characters from the first book, Getting It Right, but the anticipation of when it'll happen remained high.

There's such a sweet sincerity when it comes to Boxer that makes him such a lovable and memorable lead character. He's an honest-to-goodness good guy who has such love and loyalty toward those closest to him. He often puts everyone else's needs ahead of his own and takes it personally when a friend has been harmed or isn't doing well. Being with someone like Riley has Boxer in the caretaker role for a while but then he experiences how it is to be on the other end later on. These two provide the balance that the other is looking for, and it was refreshing to have a story about two people who didn't really have major issues about their relationship other than the usual hesitancy you find at the beginning and a tiny bit of jealousy.

Aside from Riley and Boxer's love story and Riley's dealing with his past, I loved the addition of Izzie, the stray dog that finds a home with both Riley and Boxer. There was also Elliott Quinn's side story, and the way his friends rallied around him when he needed them the most had me teary-eyed. I'm looking forward to reading his story, which is next in the series, as well as catching up with the rest of the characters, an added bonus since this is a series with characters that I've become attached to. Highlighting the importance of forgiveness and redemption plus the power of love and friendship, Finding Their Way was a touching tale and one that I thoroughly enjoyed. I'm giving this second book five out of five stars. ♥

Read my 4.5-starred review for Getting It Right.