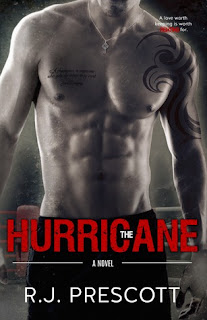 I committed every angle and curve of his body to memory, counting my blessings anew that we'd found each other. His dark skin against my pale, his hard body against my softness, his straight dark hair against my wild blond curls, he was my complete opposite in every way, but his soul was the other half of mine. He was the loud to my quiet, the confidence to my shyness, the rage to my pain. Separately, we were broken and alone. Together, we were blissfully happy and complete and every time that we made love was a celebration of that. Right now, and every time that we were together, I felt like I could take on the world.

The Hurricane, the first in a debut series by the same title from author R.J. Prescott, is one of those books that takes a hold of your heart from the beginning and refuses to let go even after you've reached the last page. It's storytelling to a degree that I would never have expected but I'm so happily surprised that I was a witness to it. I'm drawn to books that make you feel and think and allow you to experience everything that the characters are going through. That's exactly what happened here and I'm amazed that this was a first-time effort that was originally self-published and is now getting the attention it rightfully deserves.

Cormac O'Connell isn't your typical alpha male who puts his opponents in their place with his gloved fists and Emily McCarthy isn't your usual damsel in distress who cowers from every dark shadow chasing her. Con has heart and he loves beyond measure, never allowing anyone or anything to get in his way once he's made up his mind that Emily is the only girl he wants to spend the rest of his life with. Emily's past has made her fearful of just one person, but it's soon overshadowed by her feelings for Con, a man whose sheer physicality should frighten her but whose care and devotion break through all her defenses.

This was so much more than a love story between two people who were opposites. Emily, the college student with a gift for all things numbers, and Con, the up and coming boxer about to turn professional, may have been different, but they both shared family lives that were less than impressive. They were also both blessed to have people who went out of their way to make sure they went down better paths and who would have ever expected that one of those, gym owner Danny Driscoll, would solidify the particular avenue for Con and Emily to create a relationship based on true love, trust, respect, and friendship.

The book does contain a fair amount of drama and angst but that's to be expected when tackling heavy topics like various forms of abuse and addiction. That being said, there are also lighthearted moments that had me either smiling or laughing, majority of those courtesy of the guys at Driscoll's Boxing Gym and Emily's new friends. Speaking of her friends, I did notice one teeny tiny bit of a continuity issue where the minor character Ben suddenly disappeared and was replaced by Max. It's a very minor thing, plus I did have an uncorrected ARC so I'm going to assume that all corrections were made prior to the release.

Like I mentioned earlier, there are forms of abuse and addiction mentioned in the book, so I'm going to go ahead and give you guys a heads-up that there could be possible triggers. If those aren't concerns, I'm going to seriously encourage you to head to your favorite e-retailer and buy the book. It's already on both my favorite reads for 2015 list and my all-time favorite reads. I hope that the other supporting characters do get their stories told later on because quite a number of them were so distinctly memorable that it would be difficult not to want to learn more about their life and love stories sometime in the future.

I never got to read the book when it was initially released in February of this year, so I can't really compare or say if there were any changes in the text. My review is based solely on the re-release and I need to reiterate just how this wonderfully written bit of inspiring storytelling and character development The Hurricane is. There's a sequel that's set for release sometime this December and that has to be one of my most eagerly anticipated releases this 2015. I'm highly recommending you get yourselves a copy of The Hurricane and I sincerely hope you love the story and characters as much as I did. Five-plus stars! ♥