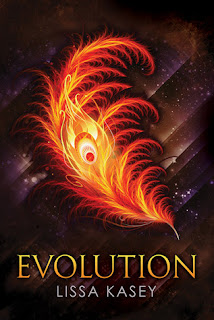 Note: This ARC was provided by Dreamspinner Press via NetGalley in exchange for an honest review.

Evolution is the first book in the series by the same title from author Lissa Kasey and is being re-released by DSP Publications, the genre fiction arm of Dreamspinner Press, after having been originally released in May 2013 under Harmony Ink Press, the teen imprint of Dreamspinner Press and written under the name Sam Kadence. The story is urban fantasy with hints of romance and is about Genesis "Gene" Sage, lead singer and songwriter for Evolution and someone able to see otherworldly things, and Kerstrande "KC" Petterson, former guitarist and songwriter for Triple Flight, part owner of REA Records, and an unregistered vampire.

Genesis and Kerstrande's first meeting is a memorable one, with Gene hitting Kerstrande with his car while trying to avoid something that suddenly catches his eye on the road. Kerstrande is snarky and sarcastic but Genesis can't help but be attracted to him, moodiness and all. Kerstrande is drawn to the seemingly innocent Genesis but knows that the secret that he's keeping from the public may very well bring the young singer-songwriter a great deal of harm. Genesis falls in love with Kerstrande but will he still feel that way once he discovers that the musical genius he looks up to is a vampire with a great deal of darkness shadowing him?

This was such a refreshingly different story from the usual vampire fare that you find in the urban fantasy genre. The vampire culture here has a familiar feel to it but the author also puts a creative spin on things. The story tends to be somewhat dark and gritty but then vampires aren't supposed to automatically evoke thoughts of sparkles and sentimentality because they are what they are: bloodsucking creatures who have been known to kill. With the music industry as its backdrop, the book evokes thoughts of Faust, a fictional character who makes a pact with the devil to attain knowledge and pleasure, only here we have a sire creating vampires in order to make members of a band become immortal and legendary, whether they choose to accept it or not.

The story does end on a cliffhanger, so don't expect to get resolutions to Genesis and Kerstrande's relationship or the future of Evolution. Cliffhangers are frustrating (and evil!), but when it comes to books like these, they whet your appetite, enough so you can't help but anticipate the release of the next one in the series, no matter how long you have to wait. Book two, entitled Evolution: Genesis is slated for release in October of this year, so I'm going to keep my fingers crossed and hope that it'll live up to my already high expectations. That's what happens when the predecessor is actually quite good--you want the wait to be worthwhile. Evolution has certainly set the bar pretty high as far as I'm concerned and I'm giving this first in a series five stars. ♥