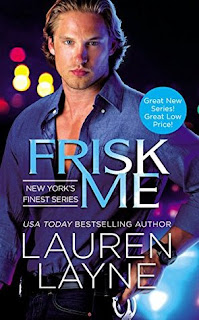 NYPD police officer Luca Moretti takes his job seriously and nothing gets in the way of his duty for the people of New York. But when a couple of YouTube videos showcasing how he truly does go above and beyond, Luc finds himself amidst unwanted attention from the adoring public. Things only get worse when he's told that a television reporter is supposed to shadow him for the next month for a TV special on him--an American hero. But Luc doesn't feel much like a hero, not with the events of two years ago still haunting him, and the last thing he needs is CBC's Ava Sims poking her nose in his professional and personal lives.

Becoming an anchorwoman has always been the goal for Ava Sims, at least that's what her ambitious parents have constantly drilled into her. The TV special on cop who's made a name for himself by way of online videos could be her ticket. Her cynicism has her thinking that Luc Moretti is too good to be true, wanting the limelight to further his career. But the more time she spends with him, the more Ava sees that he really is as dedicated to his job and an all-around nice guy. However, if she wants to make a name for herself, she's going to have to dig deeper and maybe dig up dirt on the guy she's developing feelings for.

Frisk Me is the first book in bestselling author Lauren Layne's latest series, New York's Finest, which I'm going to assume is about the Moretti family and is composed of four brothers who are cops, three of whom are with the NYPD and one currently with the LAPD, and a sister who's a defense attorney, plus their parents, their dad being a retired police commissioner, and their grandmother. Book one centers on youngest son Luca "Luc" Moretti, a police officer who may be the lowest on the totem pole as far as rank is concerned in his family but who also happens to be garnering the most attention thanks to videos capturing him rescuing a little girl from drowning and handing over his own coat to a homeless man. He now has news reporter Ava Sims hounding him because of a TV special the police department approved and while they do push each other's buttons, there's an undeniable attraction simmering between them.

This was my first Lauren Layne read and while I do have a couple of her new adult books waiting for me on my Kindle app, this book is my official introduction to her writing. Lead characters Luc and Ava have a lot of sexual tension going on, as well as some fair amount of animosity--his because of her being a pesky reporter poking her nose in his business and hers because of his refusal to open up for the interview--which makes for a number of heated and humorous exchanges between the two. Admittedly, I had somewhat of a love-hate thing going with Ava, mainly because of how she was with Luc in the beginning and then again when she made certain selfish choices. I liked how ambitious and driven she was when it came to her career but it was a career that she chose because of her parents and one particular decision she made later in the book had me feeling disappointed, not in the story per se but in the character herself.

There were certain things about the story that you expect going in--for example, lead characters who initially dislike but are attracted to each other end up falling in love--but this book still kept things interesting by having moments I did not see coming. This also had a strong cast of characters, with Luc being an all-around good guy with too much guilt weighing him down and Ava being more than the reporter in heels and tailored clothing. You've also got supporting characters that have you wanting to know their own stories, namely the other Moretti siblings and Sawyer Lopez, Luc's partner. I'm most curious about Marco Moretti, the brother currently in California with his Hollywood-dreaming girlfriend, because he wasn't actually around but he's mentioned several times. All in all, Frisk Me had a story and characters that evoked strong reactions from me and I look forward to the rest of the series. 4.5 stars! ♥