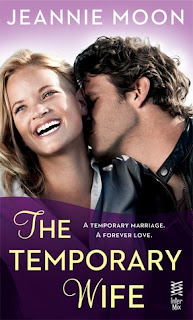 Megan Rossi's guardianship of her best friend's daughter is put in question when little Molly's grandparents file for custody. She's at a loss as to what to do since she knows just how financially capable the Campbells are to wage war against her. Then the unlikeliest of people offers her his help by way of an year-long arrangement: her first and only love, and Molly's uncle, Jason Campbell.

The last thing Jason wants is for his niece to end up with his parents. He knows firsthand what kind of life she'll end up living if they were to be granted custody. His late sister Grace made the right choice by giving Meg guardianship of Molly and now, he's willing to do whatever's necessary to help make sure Grace's wishes are respected. Even if that means marrying the only girl he's ever loved.

The Temporary Wife is the first book in the Forever Love series from Jeannie Moon and is a contemporary romance about first loves and second chances. Meg Rossi and Jason Campbell were once very much in love but Jason's decision to keep their relationship a secret weighed heavily on Meg and the fact that he didn't stand by her side when his father hurled nasty accusations at a teenage Meg ended their romance. Years later, they've both moved on to certain degrees but it's obvious that Meg still has feelings for Jason, while Jason's own feelings for Meg don't appear to be on the same level.

The agreement that Jason and Meg signed on for is the kind that you know will end up having both parties in bed and falling in love with each other sooner or later. The addition of Molly's adoption in order to fully prevent Jason's parents from taking her away did seem like the best move on Jason and Meg's part, though I did find it strange that it seemed to take them quite a while to get on with the adoption process. There seems to be a genuine rapport between Jason and Meg but I'm glad that Jason wasn't automatically back in Meg's good graces and that he had to really work to earn her full trust.

I will admit that there were moments where I found myself thinking that Meg loved Jason more than Jason loved Meg, and it wasn't just because of what the whole relationship hiding situation when they were teens. There were moments after they were married where he didn't even bother to ask her if she wanted to be by his side at events and wasn't really proactive in handling the Harper Poole situation until much later on, even though he know Meg's feelings toward Harper. Still, I did enjoy the book and found myself curious about the other characters. The Temporary Wife gets four stars. ♥