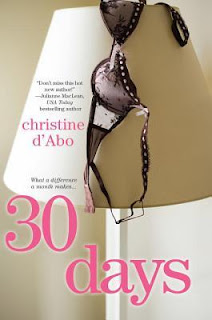 Note: This ARC was provided by Kensington Books in exchange for an honest review.

I wanted to laugh, but I knew he'd take it wrong. "Thank you for reminding me of something too."

"What's that?" His voice was hushed, but it didn't hide the crack.

"That love is too precious, too rare to just let it go away. I'd convinced myself that what  had with Rob was my one and only shot at love. That while sex is great, that was all I really had to look forward to. I needed more than that. I need a friend as well as a lover."

It's been two years since Alyssa Barrow lost her beloved husband Rob to cancer. Now thirty-five and a widow, she wonders if it's time for her to move forward, something Rob wanted her to do after his passing. She opens a letter he left her and goes through 30 cards, each one having her try something new to spice up her sex life. She's embarrassed and hesitant but decides to give the cards a shot and soon finds herself a willing partner to help her go through each one: her new neighbor, the very hot Harrison Kemp.

Agreeing that their time together isn't about having a relationship but merely about physical pleasure, Alyssa and Harrison experience sexual satisfaction like never before. But the intimacies of each encounter stirs feelings that Alyssa thought she had buried with her husband, leaving her burdened with guilt and confusion. They both said what they had would be about nothing more than sex, but with Harrison leaving in a matter of weeks, can Alyssa convince him to give them a shot beyond their allotted time together?

30 Days is the first book in the new series with the same title from author Christine d'Abo. While this book shares the idea of a spouse that has passed away leaving his wife written letters or notes with Cecelia Ahern's P.S. I Love You, a personal favorite of mine, it does stand on its own merits and sets itself apart with two easily likable lead characters, Alyssa Barrow and Harrison Kemp. Their non-relationship has a deadline and while neither of them set out to fall for the other, the heart wants what it wants, especially when it comes to having a second chance at finding true happiness with a significant other. It's difficult to not smile or snicker at some of their sexual adventures together, but there were also times that they were toeing the line being raunchy and being romantic, making it obvious where their emotions were headed.

Moving forward is rarely easy, what more for a woman who was with the love of her life since she was a teenager, only to lose him a decade and a half later. Rob Barrow loved his wife and knew that someone like her deserved to find happiness after his passing. The letter and notes were almost like the permission Alyssa needed to re-focus on herself and begin a new journey without Rob by her side. He had given her his blessing while he was still alive but his words from beyond were like the nudge to send her on her way and her older sister's encouragement and Harrison's agreement to help her out were the push to continue the forward motion of her new life. With humor and courage Alyssa opened herself up to new realizations, especially when it came to welcoming someone different into her life and her heart, and not just her body.

When I read the book, I had no idea it was actually the first in a series, and based on the sneak peek included, I'm guessing that the second book is completely separate from this one. 30 Days feels like a standalone and I'm glad that it didn't end the way I would have expected it to. As I was reading the book, I couldn't help but imagine the story in my head, with the text almost feeling as if I were watching a movie. This was entertaining and had me flipping from one page to the next without being conscious of the time that had passed. I'd recommend this to anyone looking for a read that's more than the usual love stories we encounter regularly. 30 Days is on my list of 2015 favorites and I'm happily giving it five-plus stars. ♥