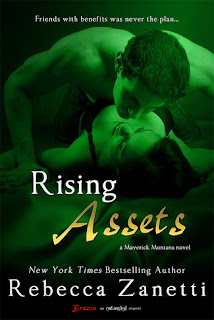 Colton Freeze and Melanie Jacobs have been part of a triumvirate of best friends since they were kids, but there's always been a special connection that just the two of them shared, one that a lot of people in their town of Maverick, Montana have been waiting to blossom into something more for years. But Melanie doesn't think she's suited for someone like Colton. He's got long-term plans for every aspect of his life while her life currently has her trying to take care of her family ranch, holding down several jobs, and is dealing with endometriosis diagnosis, which could mean she may never be able to have children of her own. The last thing Melanie wants is to saddle Colton with her worries, but he wants her to know that he's the kind of friend that will always be there for her...until he finally realizes he wants to be so much more.

Rising Assets is a contemporary friends-to-lovers romance and is the third book in Rebecca Zanetti's Maverick Montana series. Colton Freeze is the third Lodge-Freeze sibling and the one brother who didn't enter military service, spending his time studying and earning degrees to better prepare him to man the family business. He's been best friends with Melanie Jacobs and Hawk Rain for many years but it's only after he returns home to finally settle into his position as president of the board of their family corporation that he begins to see Melanie in a different light. Everyone around them has been encouraging them to take that next step and move on from becoming friends to something more, but it appears it's taking Colton longer than Melanie to come to the realization that his feelings have evolved.

I liked Colton and Melanie together because they had this easygoing dynamic that faltered and become adorably stilted whenever their attraction got the better of them. Friends-to-lovers story lines are a dime a dozen in the romance genre, but the addition of Melanie's medical condition presented an interesting twist to the friendship, especially since Colton has always been the kind of friend that wants to fix everything. The thing is, does he want to fix Melanie's problem as her friend or as the person that she can spend the rest of her life with? With Melanie's insecurities and believing that she is nowhere near at par to what someone as accomplished as Colton deserves, there are a lot more obstacles than you would expect before these two open their eyes and see that no one fits them better than the one who knows them best.

Aside from the usual family banter that is one of the cornerstones of this series, the friendship among Colton, Melanie, and Hawk was in full display in this book and I must admit that the love and loyalty they have for each other was touching to read about. Melanie and Hawk truly are a part of Colton's family, having been taken in and accepted by Colton's parents and siblings. The story was about discovering that the person you're meant to be with is the one who's been right there the whole time, about learning that family supports you in good and bad times, and that true friendship knows no bounds. With each passing book, the Maverick Montana series simply keeps getting better. Rising Assets gets five out of five stars. ♥