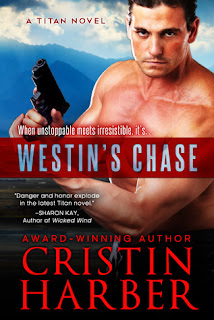 "I love you, Sugar. You're mine. That's about as real and honest as it gets. Not sure that either of us had a choice. Life presents facts, and this is one. I was born to be with you. Hell, I only existed before I chased you down. Held you to me. Made you love me. And now I live."

Westin's Creed is the third full-length novel in Cristin Harber's Titan series and finally turns the spotlight on Boss Man himself, Jared Westin. He may call himself the "master of everything" but it appears that there's one thing that he has yet to master and she goes by the name of Lilly Chase, otherwise known as Sugar. The woman who knows her weapons is the one female that could give Jared a run for his money, someone he considers an equal. The former undercover ATF agent has always been able to hold her own, but now she needs to be rescued after being captured in Afghanistan and Jared and the Titan Group will do anything to get her back. But things are far more complicated, with Jared's main rival setting his sights on the two things that could bring Jared to his knees should he ever lose them: the Titan Group and Sugar.

Jared Westin commands attention, and it isn't simply due to the fact that he owns the Titan Group. He knows how good he is at what he does and has no qualms reminding people that he knows what the heck he's doing. Lilly Chase, aka Sugar, likes that she can put Jared in his place, but her intensifying feelings for him scare her. Of course, being around Sugar stirs up emotions Jared's never encountered before, making this combination a very highly combustible one! I love, love, LOVE that Jared was given a love interest as formidable as Sugar because I simply couldn't see him with a shy, quiet, and assuming girl. There's a lot of banter between the two and the whole "Babycakes" and "J-Dawg" thing was cute and you would never think that the word "cute" would fit Jared and Sugar, but yeah, they certainly had a few cutesy moments.

I think part of what makes Jared such a successful leader of Titan is that he doesn't allow his emotions to get in the way of something that needs to be done. Yes, he cares about his men and their welfare will always be at the top of his priority list when it comes to missions, but he's also realistic and realizes that lives are going to be at risk. With him going to war against his nemesis, not just as individuals but with their respective security groups, Jared has more to lose and now his emotions do become involved because of Sugar. I like that this book presents a more human side to him, the side that he rarely ever shows, especially those times Sugar's life was at risk and when he encountered a betrayal that he never saw coming. The man who did it had my heart breaking , especially the reason why he was compelled to do so.

Among the books in the series, I would have to say that the antagonist here is the one I hated the most and it had a lot to do with the fact that it had nothing to do with some sort of misguided ideology or plain, old greed. Nope, it was simple envy and his being envious of Jared Westin and everything that he and the Titan Group represented and could do had him making it an extremely personal war. I admit it: Jared is my favorite male lead character in the series and maybe that's why this third book is my favorite one. The action and suspense, along with the humor and angst, are to be expected, but this had a completely different feel to it and any fan of the series has to admit that seeing Jared falling in love was the cherry on top of this scrumptious delight of a read. Westin's Creed went above and beyond and gets five-plus stars. ♥