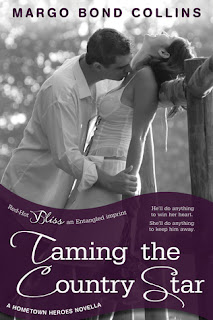 Kylie Andrews shared a few days together with a guy named Cole in Cozumel, Mexico. On her way back to the U.S., she discovers just who Cole is--country singer Cole Grayson. She knows firsthand what being with someone famous and constantly hounded by paparazzi can do to a relationship because she watched how her mother was crushed by photos and gossip about her father's affairs while he was a rodeo star. She refuses to go through the same experience and tries to forget Cole but being a famous chart-topping singer in country music has him invading her consciousness with songs on the radio, concert posters, etc.

A year after Cozumel, Cole finds himself in the Stockyards District of Fort Worth, Texas and he knows he's this much closer to seeing Kylie Andrews, the girl he's never forgotten, again. He knows he should have been upfront about who exactly he was, even if she did insist upon not learning his last name. He wants her to give them a second chance to make a go of a relationship, but he soon realizes why she's so adverse to being with someone in the spotlight. Can Cole convince Kylie that what they have together is worth the risk of being hounded by the media and that he is nothing like the father who broke her mother's heart.

Taming the Country Star is the first story in the Hometown Heroes series by Margo Bond Collins and is novella in length, making it a quick but fairly fun read about Cole Grayson, a country star, and Kylie Andrews, a shop owner, who meet in Cozumel, Mexico and have a second chance at love in the Stockyards District of Fort Worth. Cole's in town for a concert, one that Kylie finds herself attending because of free tickets her best friend won. He knows that Kylie lives and owns a store in the area, which begs the question of why he never actively sought her out in the year since Cozumel, but he certainly made up for lost time.

I did like Cole and Kylie together, especially after she allowed herself to let go of her apprehensions about being with someone like him. Country music stardom hasn't made him some cocky, spoiled star and his intentions when it comes to Kylie seem genuine, making Cole an honest-to-goodness good guy with a heart of gold. Kylie's best friend, LeeAnn Walker, was memorable as was Cole's manager Billie (no last name mentioned). Taming the Country Star is a quick read and works as a standalone, though you may as well read the two books in order since Cole and Kylie appear in LeeAnn's story as well. I'm giving it 3.5 stars. ♥