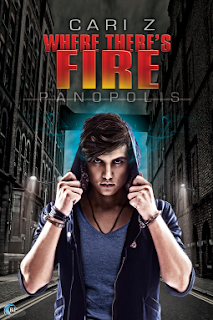 Edward Dingus no longer an ordinary human being. He does, however, feel somewhat like an ordinary Villain in Panopolis, as he tries to make a name for himself, both literally and figuratively (because who wants their Villain name to be the name they were born with?!). He's still trying to control the power he acquired while he was incarcerated and experimented upon. His boyfriend, Raul Tremblay, aka the Mad Bombardier, is Edward's main support system until Raul is kidnapped by Maggot, a Villain who has an evil agenda and isn't above getting Edward to do what he wants by hurting Raul. Now, Edward has no on to rely on but himself if he has any hope to save Raul from the clutches of Maggot before it's too late.

Where There's Fire is the second novella in the Cari Z-penned urban fantasy series Panopolis and picks up about six months after the events of the first novella, Where There's Smoke. Edward Dingus is now a villain in training and Raul Tremblay, Edward's boyfriend and fellow villain who goes by the moniker the Mad Bombardier, has been kidnapped by a villain named Maggot who wants Edward to do his bidding in order to help bring Panopolis, especially its heroes and the conglomerate behind them, to its knees. With time not on his side, Edward needs to figure out how to get the information Maggot wants and how to exact revenge on the villain that's harmed Raul and is drunk on his reign of terror among villains.

I liked the direction the story went, with us learning more about how GenCorp operates and how their dirty fingers have dipped into the whole Heroes versus Villains scenario in Panopolis. Readers are also introduced to a few more villains who I suspect will play a role in what happens next with regards to Edward's new mission in life. It was also nice to see the return of Freight Train, aka Craig--a hero that I never really saw as the one who betrayed Edward in the first book (because that was all Craig's me-maw's doing) and always seems like an actual nice guy. SuperTruther's post have definitely heightened the whole conspiracy factor and I'm curious to see what's in store next! Where There's Fire gets five stars. ♥