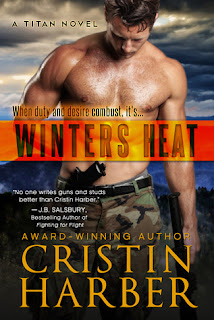 Winters Heat is the first novel in the popular romantic suspense series by Cristin Harber entitled Titan, which is about a group of elite operatives who are able to take on missions that others aren't capable of accomplishing on their own. Book one is about Colby Winters, a member of the Titan group, and Mia Sheridan, a therapist who works with the military. Colby unexpectedly crosses paths with Mia when a package he was supposed to get at an airport is taken by Mia, who, in turn, is kidnapped by a men working for a man known for human trafficking. Suddenly thrown together by circumstances neither of them anticipated, Colby and Mia need to learn to trust one another, but soon, other emotions come into play, emotions neither of them have ever dealt with before, leading them to take risks that could cost them.

I know there are a lot of readers out there who like romance novels with alpha males as the heroes. I like them just fine, but I do have a prerequisite that they be men with a heart who learn how to bend when they meet the women they're meant to be with. Without a doubt, the men of the Titan Group are exactly the kind of alpha male that I can snuggle up with and squee over as I read their stories on my tablet. Yes, by the time I'm sitting down to write this review, I will have already gone through all six full-length novels and three novellas in the series. Goodness, I don't know how I could have gone this long without having read these books, but I'm a firm believer in better late than never. And since this first book is still available for free download on e-retailers, I suggest you check it out because seriously, what do you have to lose?

Colby Winters and Mia Sheridan meet under the most trying of circumstances and while it may appear that their feelings develop pretty quickly, it may have to do with everything that was thrown their way and that they had no one else to really rely upon other than one another for several days. The events experienced may have heightened their emotions but there was definite chemistry between them and it was interesting that Colby was the one who was surer about his feelings and what he wanted than Mia. The action and suspense did not disappoint, making me swipe from page to page from beginning 'til the end. There's also a fair amount of romance, both the sweet and steamy kind, plus some humor thrown in. The anticipation builds throughout the book and I'd be hard-pressed to find a moment where I got bored.

This first book did a number of things right. It was able to introduce readers to a number of the main players in the series and piques enough of your curiosity to make you want to read whatever book was next in line. It was also successful in standing on its own with a strong and attention-grabbing story that had two lead characters you couldn't really turn away from. I really liked Cristin Harber's writing and after having finished nine books, I must say that she truly has a gift when it comes to this particular genre. Winters Heat can be read as a standalone, though, I'm going to highly recommend that you read the series in order because each book is worth the time you put into it. I'm giving this first book 4.5 stars out of five. ♥