Review: Past My Defenses by Wendy Sparrow (Taming the Pack #1) 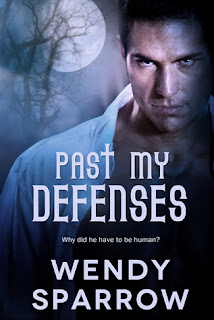 Past My Defenses is the first novel in the Taming the Pack trilogy from author Wendy Sparrow and is a paranormal romance about a female lycan belonging to the Glacier Peak pack named Vanessa Tucker who meets her mate in the form of a human, park ranger Dane Hansen. The last thing Dane expects to find is a naked woman in the place of a downed wolf he rescued in the forest. Immediately, there's a scent-match that's made, connecting both Dane and Vanessa to one another and, once accepted, become committed to each other. But a match like theirs has the Glacier Peak alpha more than wary and with Vanessa now a target for poachers, Dane is ready to put his life on the line to protect the woman willing to do the same.

This book was such an amazingly awesome surprise of a read. I think this was the first paranormal romance that had my doing a bit of research to find out the difference between lycans and werewolves and the first that I can remember involving such paranormal creatures mixing it up with humans that made me laugh more than once. From the moment that Dane realizes the wolf he brought in had been replaced by a very naked Vanessa, I knew this was going to be a ride I wouldn't soon forget. I loved every minute of Dane and Vanessa's love story, especially the snarky moments involving not just the two of them but Glacier Peak alpha Jordan Hill as well. And talk about sexual tension! Dane and Vanessa had it in absolute spades!

I liked the idea of a human and lycan becoming scent-matched, which is an even higher level of mating, equal to an actual marriage for humans. It makes you wish that such things were possible in real life, where two people destined for each other become part of a committed relationship as soon as the fact that they're match is accepted by both parties. Dane and Vanessa went throw growing pains in their relationship, some of which were rather hilarious, but these two instinctively knew that they were ready to die for each other if a situation came to that point. Aside from the love story, of course, there was the whole poaching mystery and if the human poachers were being aided by someone from inside the pack.

The story itself was wonderfully creative and had that mix of humor and suspense that made sure I was entertained from start to finish, but this book also had a cast of characters that included several supporting characters that called your attention and proved to be unforgettable. Dane and Vanessa were opposites--he with his calm and patience and she with her neurosis and outspokenness--then you had Jordan who was such a scene-stealer, plus Deputy Travis Flynn who was more than he seemed to be. Both Jordan and Travis will get their stories told in books two and three, respectively. Suffice it to say that I thoroughly enjoyed Past My Defenses and it had me reading the next book immediately after. Five stars! ♥

Purchase Past My Defenses on Amazon | B&N | Kobo.