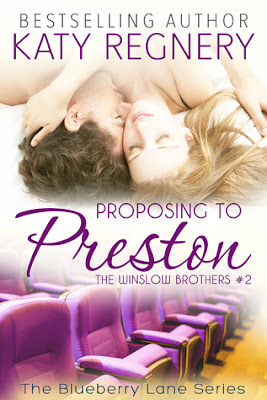 About Proposing to Preston
Preston Winslow has a heart as open as the sky and room in his life for someone special. When he falls in love with Broadway actress, Elise Klassan, he holds nothing back.

Elise, who has made tremendous sacrifices to forward her career, is swept off her feet by handsome, charming Preston...but the stage has been her first love for so many years, she doesn't know if there's room for Preston in her life. When the day comes that she must choose between her ambition and her heart, she profoundly hurts the one man who could have made her happy.

Two years later, Elise has become a world-famous actress and Preston is a very successful lawyer. But fame has not equaled happiness for Elise, and Preston is much too bitter and cynical to ever consider falling in love again.

Is it possible that the only person who can mend Preston's heart is the one who originally broke it? Only if Elise can figure out a way to make him believe in love all over again.

Purchase Proposing to Preston on Amazon.

About Katy Regnery
Award-winning and Amazon bestselling author Katy Regnery started her writing career by enrolling in a short story class in January 2012. One year later, she signed her first contract for a winter romance entitled By Proxy.

Now a hybrid author who publishes both independently and traditionally, Katy claims authorship of the six-book Heart of Montana series, the six-book English Brothers series, and a Kindle Worlds novella entitled Four Weddings and a Fiasco: The Wedding Date. Katy’s short story The Long Way Home appears in the first Romance Writers of America anthology, Premiere, and she has published a standalone novels, Playing for Love at Deep Haven and the bestselling a modern fairytale collection. The Vixen and the Vet was nominated for a RITA® Award in 2015.

Katy lives in the relative wilds of northern Fairfield County, Connecticut, where her writing room looks out at the woods, and her husband, two young children, and two dogs create just enough cheerful chaos to remind her that the very best love stories begin at home

Excerpt from Proposing to Preston
“I like you, too,” she whispered, unable to stop herself, mesmerized by the clarity of his bright green eyes staring deeply into hers.

His gaze dropped briefly to her lips before claiming her eyes again, and she knew that it was her cue to get up and walk home, but she couldn’t. He was about to kiss her, and she wanted him to.

Leaning forward, he dropped his lips to hers, and her eyes closed as her heart fluttered madly behind the prison of her ribs. He cupped her cheeks gently, pulling her closer as his lips caught hers. As though he knew that rubbing his coarse scruff across her skin would burn, he was careful with her, his lips strong, yet soft, insistently taking hers, loving them before giving them back and then taking them once again.

One of his hands slid into her hair, his fingers fanning out in the soft tresses as he cupped the back of her head. His other hand feathered slowly down her neck, tracing her shoulder and skating down her arm before winding around her waist to draw her up against his chest.

Lifting his mouth from hers, he tilted his head, then dropped his lips again, sealing them over hers as she tangled her arms around his neck, arching her body into his.
And he kissed her.

Oh God, he kissed her.

Elise had been kissing men on the stage since she was sixteen years old, and many times the touch of someone else’s lips on hers had stirred a feeling within her, whether she actually liked her co-star or not. But never—not with her meager list of ex-boyfriends, nor with any man she’d ever kissed under the hot lights of the theater—had she experienced the sort of chemistry she now shared with Preston Winslow. 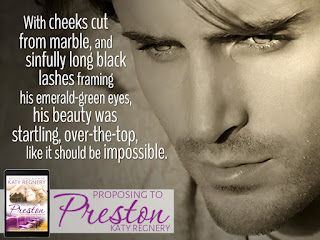 His tongue, hot and velvet, slid against the length of hers, and she moaned softly from the back of her throat, a hum of pleasure as his fingers curled into a fist on her lower back, pushing her body closer to his. His hair, soft as silk through her spreading fingers, teased her skin as his lips continued their gentle invasion.

And then, as quickly as it had begun, it was over. Preston rested his forehead against hers, his sigh hot and sweet against her lips as his chest pushed forcefully into hers with every deep breath he took.

Just another second, her heart whispered. Keep your eyes closed and memorize this. This. Him. Now.

“Elise,” he murmured, and she heard the question in the sound of her name—the plea, the supplication, the permission to keep going, to take more.

For years, she lived her life for one reason: to be a successful stage actress. She’d sacrificed, suffered and labored toward that goal single-minded, poor, and lonely, but always grounded in the belief that if she let nothing get in her way, she would eventually make her dreams come true.

Now? Here? With Preston Winslow’s arm around her, his breath warming her skin, his fingers wound in her hair, the low sound of his voice like precious music to her ears, she began to understand the magnitude of the threat he posed to her ambition. She’d sensed it the first night she met him, as his eyes dove into her very soul, that Preston Winslow unchecked in her life could become an addiction. And here she was, limp and languid against him, her heart begging for one more perfect moment before the brutal ache that would start when she walked away from him yet again.

Before she lost every shred of strength she possessed, she pushed at his chest, leaning away from him. He dropped his hand from her hair and unfurled the fingers that had been resting in a tight knot against her lower back.

“Elise?” he asked, his eyes searching hers.

“I have to go,” she said, standing up quickly before she lost her will.