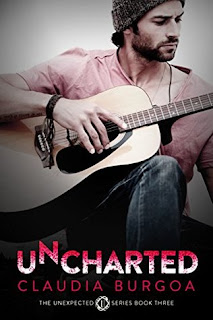 Jacob Christian "JC" Colthurst-Decker desperately needs to get his act together. He's been tabloid fodder for years, what with his drinking and womanizing, but the world used to know him for his music, his family, and his ability to spot musical talent. Now, his family's brought in a public relations expert to help clean up his image, but one look at the woman who's tasked with the job and the unexpected reunion with the girl who's haunted his memories brings a myriad of pent-up emotions. He's written songs filled with love and longing as well as lyrics about anger and loathing about Cypriana Marie "Pria" Walker; now, he's torn between giving her what's left of his heart and taking back the parts of it he gave her ten years ago.


Uncharted is the third novel in one of my favorite series this 2015, Unexpected, by Claudia Burgoa and is the love story between Jacob Colthurst-Decker and Pria Walker and is told over the span of a decade. This is the longest among the three currently available books in the series because it does show readers how Jacob and Pria met, shared an unforgettable week together, and how fate seemed to get the better of them for a good, long while afterward. With the focus of the first two books being on the only female among the Colthurst-Decker triplets, Ainsley Janine aka AJ, it was great to get to know Jacob better (Matthew's story is next in the series), and fans of the series finally learn why he is the talented but tortured soul that he is.

People may think that a scrap of paper is an inconsequential thing, but when it holds the phone number of the girl you believe is your soulmate and that paper is irretrievable, then its importance becomes monumental, but then hindsight is always twenty-twenty, right? It's that missing phone number that triggers years of angst for the lead characters, but more on Jacob's end than Pria's. Jacob's struggles were often painful to read and you couldn't help but feel for the guy because he just seemed so lost. Pria's problems were more family-related, but she, too, undergoes changes after that week spent with Jacob leads to nothing. Aside from Jacob's ever supportive family, I loved Pria's older sister Mae and her spunk.

By the time I finished reading the book, I felt myself flooded by mixed emotions. It felt like Jacob entered his own personal brand of hell and stayed there for more years than he should have. The guilt and all those promises that were made were weighing him down and the abuse he was putting his mind, heart, and body through was almost like a self-flagellation of sorts. After everything Jacob went through, I couldn't help but ask myself, "All that for what? Was it even worth it?" And, at the end of the day, I guess you could say that true love is worth the pain and sacrifice and if two people are really meant to be together, then that very same true love will find a way. It may be sappy but if you truly believe then that's all that matters.

My curiosity is definitely piqued with as far Matthew's upcoming story is concerned, mainly because of who captured his attention, and vice-versa, in this third book. I was wracking my brain, trying to recall if there was any mention of his preferences when it came to people he dated. I think I know who he's going to be partnered with in the next book, but even if I'm wrong, I'm too addicted to the Unexpected series and will be devouring each book that comes out. While I am recommending Uncharted, I would like to suggest that you read the series in order because it does make for a better reading experience and explains a lot of what goes on here with the always entertaining Colthurst-Decker family. This gets five out of five stars. ♥

Read my reviews for the Unexpected series:
Unlike Any Other (book one) - 4.5 stars - Review
Unsurprisingly Complicated (book two) - five-plus stars - Review