Review: A Change for the Good by Melanie Jayne 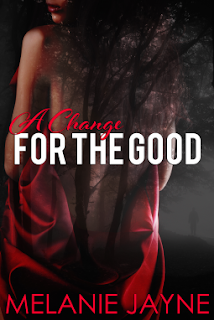 Note: This ebook was provided by Rock Star Lit PR in exchange for an honest review.

A Change for the Good is a standalone contemporary romance from Melanie Jayne and is about a woman in her forties starting her life over after her eighteen-year marriage which ended in divorce and a man who is trying to recuperate after getting shot while working undercover for the ATF. Zoe Crawford and Tony Alessi are both looking for change when their paths cross at the gym they both go to. Zoe has her insecurities regarding her size and the age difference between her and the thirty-three-year-old Tony. Add to that a stalker that seems to have it out for her and Zoe's need for a change may cost her more than she bargained for.

Let me begin this by saying that I always go into a new book with an open mind and an open heart, especially when it comes to new authors or authors whose work I've never read. I dislike giving ratings that are below three stars and I sincerely try to not be discouraging in my reviews because I'd like to believe every author has a story that they want to share with readers. A Change for the Good had a pretty good idea but, sadly, it faltered in terms of execution. There were scene changes that were abrupt because the book lacked formatting that would have clued the reader in that there was going to be a shift. Then you had the storytelling go from a third-person point of view to a first-person POV because the character was expressing their inner musings. That could have been done by having the text in italics.

I didn't feel a connection between Zoe and Tony at all. It felt forced and there were facets of their personalities that simply didn't make sense, almost comically so. Zoe would put on this snooty facade whenever she was questioned about something and then you had Tony being pissed at his brother because of his concern, even when the concern wasn't overboard. These two were confusing as heck, though I did like that the heroine wasn't the cookie-cuter kind of female--she was a size eighteen, in her forties, and was older than the hero. Then you've got the supporting characters, especially the females, who were more in-your-face than I would have expected and engaging in inappropriate starter conversations with the lead characters. The only character who was pleasant enough was Tony's brother Geno.

This is one of those cases of a missed opportunity and I truly feel bad about not being able to fall in love with either the story or the characters. Maybe an editor's critical eye would have helped so that everything could have been put together more effectively. Like I mentioned earlier, giving a book anything less than three stars is difficult for me because it feels so disheartening. In the end, I have to be honest about my feelings of the book and will simply wish the author luck with her future endeavors. I'm going to have to give A Change for the Good two stars out of five because the idea really was a good one. ♥

Purchase A Change for the Good on Amazon.