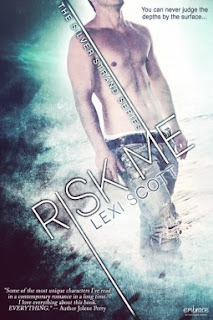 Maybe it's not about  having your shit figured out or learning how to let go. Maybe it's about finding the right person to be with, to change with not for.

Risk Me is the second novel in the Silver Strand series from Lexi Scott. The book was originally released in March 2013 under the names of writing duo Steph Campbell and Liz Reinhardt and with the title Depths. This second edition has been re-edited and includes new material and is about two people who appear to be in different stages of their lives but share more than they realize. It's time for both of them to make necessary changes, but they need to be willing to take chances, saving at least one of those with each other. Some risks are more terrifying than others because they can set you up for disappointment and heartbreak, but when you meet the one person worth taking a risk for, the rewards could be life-changing.

After his longtime girlfriend ends their relationship and tells him he lacks spontaneity, Cohen Rodriguez is taken aback. He can't help but wonder if what his ex said held some truth. To bounce back, he goes on a series of blind dates that could be the worst in history. He finds comfort from the calls and texts of the girl who works at the warehouse of their family-owned furniture store. They've been talking for a year but have never met face to face, though he's often tried to visualize Maren in his head. After a year, they finally meet when she invites him to a baseball game as someone else's blind date, but Cohen quickly realizes that he'd rather be with the fascinating girl behind the voice and messages than the one she's set him up with.

She knows she should get her life in order but Maren Walshe has too much going on, what with caring for her alcoholic father and trying to earn enough to pay for rent, utilities, and their other needs. The money she was using for school disappeared when her father used it to buy more alcohol, leaving Maren with having to put off finishing her studies. She's had a string of failed relationships and she makes do with booty calls when the need arises. The one bright spot in her daily drudgery is her regular phone conversations with the guy helping out his family's furniture store. She's fantasized about Cohen for so long and when the time comes for the two to finally meet, she sees that reality is way better than fantasy.

Conversations made via letters, email, texts, or phone calls can be business-like and strictly professional, shallow and trivial, or meaningful and thought-provoking. In Cohen and Maren's case, I imagine their conversations began as business associates, exchanging facts and figures and details pertaining to an order or two. Within the year they were talking, the calls probably became friendlier and more relaxed, but nothing overly deep. However, when Cohen's relationship ended, things did become personal and then it was time for them to see if the fantasy met up to the reality, but Maren's reality was far more complicated than Cohen's and there was a lot of resistance on her end to ask for and accept any sort of help he offered.

The book has as much to do with family as it does with falling in love. Parents often have certain expectations of their children, but then children also have certain things they expect from their parents. Family should be there when they're needed but you also get to the point where you've given as much as you can give and you need to take a step back and leave enough of yourself intact to live your own life and pursue your own dreams. Relationships also work best when you're able to be the best version of yourself and share it with the person you love. For Cohen and Maren to achieve happiness together, they had to be willing to take risks for themselves and with each other. Risk Me is a great sequel and gets five-plus stars. ♥