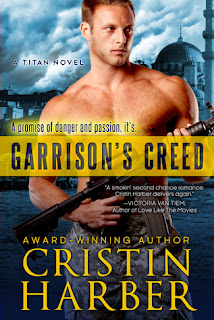 Garrison's Creed is the second full-length novel in the Titan series from bestselling author Cristin Harber. This book is the third in the reading order, coming after its prequel novella, Sweet Girl, and takes place ten years after the events involving Cash Garrison and Nicola Hart in the said prequel. He mourned the only woman he's ever loved for so long, so when Cash Garrison recognizes the woman he sees through the scope of his rifle as Nicola Hart, he's shocked. Nic knows how much she hurt the one man who's owned her heart, but she wants him to realize that, while she may no longer be the girl she once was, her love for him has never changed. Working together gives them a chance to re-discover one another, but there are several people after Nic and Cash will do absolutely anything to keep her by his side for the rest of his life.

I loved this combination of a second chance romance wrapped in an action-filled suspense thriller and after that evil cliffhanger from the prequel (though who am I to complain since I already had this book waiting for me?), I'm glad Cash Garrison and Nicola Hart finally get their new lease on a love story worthy of the Titan series. These two lead characters are different from the ones we meet in the prequel, having experienced a great deal more, what with her entering the CIA after her stint with witness protection and him after being in the Army and now with the Titan Group. I can fully understand Cash's feelings of hatred warring with his undeniable connection with and love for Nic. No one likes being lied to and even with her reasons, the betrayal is still there, especially since it's obvious that she's been living her life all this time.

There are a number of things that go on in this story: Nicola's return from the dead and her reunion with Cash and her brother Roman, going after the double agent who betrayed Nic during her last mission, and trying to find out who has it out for her. The level of intrigue is higher here compared to the first book in the series and there's a lot of history between the lead characters that makes their love story all the more interesting. There's more than one person after Nic and there were a couple of twists I so did not see coming. Saying I was caught by surprise is such an understatement but I do love it when an author is able to do it and not just once but twice! The second one actually reminded me of those horror movies that lull you into a false sense of security and complacency and then BAM! I was left with my mouth hanging open.

While the love they had was still very much there, even after a decade apart, Cash and Nic had to re-build the trust that once existed. They also had to learn how to be with the new versions of themselves, especially when it came to Nic putting herself in danger because it was part of her job. She was no longer the girl that Cash and Roman had to constantly watch over and keep from harm. She could fend for herself but I so get Cash's need to still protect her even though he saw her as his equal. Both Cash and Nic are strong characters who appear to have only one supposed vulnerability: each other. I loved the interplay of the Titan Group members with Nic, especially between Titan's head honcho Jared Westin and Nic, and among one another.  Garrison's Creed is one of my favorite novels in the Titan series and gets five stars. ♥