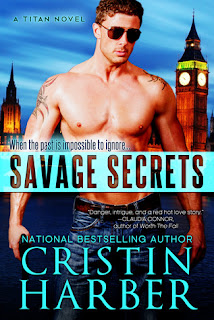 Savage Secrets is the sixth in the Titan series by Cristin Harber After a mission that still has him feeling the aftereffects of a hallucinogenic agent, Titan Group team leader Rocco Savage isn't sure if the exotic woman he sees is a figment of his imagination or his fantasy come true. But there's more to Caterina Cruz than being beautiful. The fact that she was able to put in a personal request for Rocco in particular makes him wonder what her connection is to the head of the Titan Group. Both Rocco and Cat are keeping secrets from one another but this two need to make people believe they're a pair of happy newlyweds and soon pretend becomes all too real. Will they be able to survive when Cat's past comes in the worst possible way?

The prologue in the book starts the story off in the right direction, establishing Caterina Cruz's need for revenge. I'll admit that I initially thought the man who spoke to her was Rocco Savage, but who it actually turned out to be made far more sense. From the beginning, you know that this is going to be different from the other books in the series and there was one particular moment that it was almost too painful to keep reading. You could almost feel the same kind of desperation and helplessness that permeated and I had to take a few minutes to step back and take cleansing breaths before I continued. With that said, be warned that there are triggers in the book that have to do with violence and non-consensual intercourse.

You can't help but fall in love with Rocco in this book. The man is a different breed altogether, but then I guess that's par for the course when it comes to the men of the Titan Group. He stood by his convictions and by his feelings for Cat. Other men would have fallen apart or simply turned and walked away, but not Rocco. This was a man who had his own issues that were affecting his professional and personal lives, yet he had no qualms taking on the burdens of the woman he loved. He gives you thrills with the action and suspense he encounters but the man also gave me chills when he let Cat know he wasn't going anywhere after she told him the latest secret she was keeping from him. Goodness, Rocco Savage needs to be cloned.

My one iffy moment in the book had to do with the epilogue because it didn't give me the answer I was looking for to the one question I had. I get why not giving a definitive answer to what I'm sure was something a lot of the readers of the book were curious about was employed. After all, it showed that Rocco and Cat's love was beyond what happened. I guess I wanted closure for myself, but Rocco and Cat didn't feel it mattered as much as they're being together in spite of all the crap thrown their way. If you're looking for a romantic suspense novel that teaches that true love knows no bounds, then I suggest you check out Savage Secrets, as well as the rest of the books in the Titan series. This sixth book gets 4.5 stars. ♥