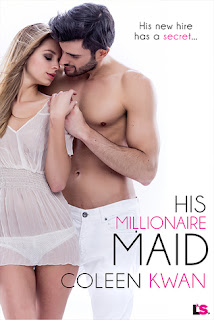 Nina Beaumont has had it with people thinking that all she has going for her are her looks and her family's money. She's been under her father's thumb for far too long, so when fate intervenes in the form of a wayward duck, causing her to crash her car into an embankment and watching it sink under the murky waters, she takes it as her opportunity to try life out as being someone other than being a Beaumont.

Under the name Nina Summers, she quickly finds a job as a maid at a bed and breakfast owned by Joe Farina after he mistakenly assumes she's the temp he's been waiting for. Soon enough, the two find themselves moving from flirting to sleeping together, but will Joe still want to have anything to do with Nina once he finds out that her father is the same man who's been trying to buy his B&B and his land?

His Millionaire Maid is a standalone story from Coleen Kwan about a young woman who wants to be more than just the beautiful, rich girl and ends up falling for the bed and breakfast proprietor who employs her as his maid. Nina Beaumont is in Mendocino County when she gets into a bit of a car mishap, so when she decides to try being someone other than who she is, no one really recognizes her since she actually lives in San Francisco. Her new boss is Joe Farina and he pretty much doubts she has the qualifications necessary to be a maid but he's desperate, plus he's attracted to her, an attraction that seems very much mutual. I honestly didn't feel a connection between the two of them until the latter half of the book. As individuals, though, Nina and Joe were a delight, both instilled with a need to prove themselves as responsible adults.

This is a lighthearted contemporary romance with a good set of characters. The story line of a rich girl pretending to be anything but and falling for the hardworking and not-so-rich guy is a common one but the author handled it well, adding bits of humor here. I do wish, though, that Nina's relationship with her father was threshed out more since it was what triggered her to work in his company even though she wasn't happy. Also, Joe was rather clueless when it came to how he felt for Nina and it took those closest to him to point out a thing or two on that regard. Speaking of which, I wouldn't mind if Vince and Sarah have their own story, either separately or as a potential couple. All in all, His Millionaire Maid was fun and flirty, which pretty much sums up the kind of love affair Joe and Nina had, and I'm giving it four stars. ♥