Review: Even the Score by Kate Meader (Tall, Dark, and Texan #1) 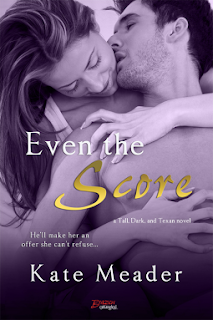 Dinner theater may pay the bills but actress Tess McKenzie didn't count on crossing paths with the very man whose wedding was abruptly called off as soon as she delivered him his bride's message a year ago. He may still hold the demise of his relationship on but tycoon Hunter Dade needs Tess's services. Hunter wants Tess to pretend to be his fiancée for a few days and in exchange she receives enough money to finally get the theater group that she wants off the ground. Of course, this may also provide Hunter with the opportunity to get back at Tess for what she did at his wedding, but when their chemistry proves to be off the charts, both Tess and Hunter may lose more than her theater group and his business deal.

Even the Score is the first book in the Tall, Dark, and Texan series from author Kate Meader and is an enemies to lovers romance between Tess McKenzie and Hunter Dade. Hunter has always blamed Tess for his wedding getting called off, believing that his then-fiancée was influenced by her maid of honor, who just happened to be none other than Tess. He thinks Tess sees him as someone beneath her, but Hunter has worked hard to get to where he's at in life to have some society princess make him feel like he isn't good enough. What Hunter doesn't know is that Tess knows what it feels like to put in the time and effort to get what she wants and that she hasn't relied on her actress mother's fame and fortune in years.

There's a mix of smoldering emotions that goes on between Tess and Hunter. It's obvious that they don't think very highly of each other in the beginning but they also feel somewhat sorry for one another--he for her having to work dinner theater and she for the humiliation of having his wedding cancelled. Then there's the attraction and the fact that they keep things interesting between them, even if it does entail regular quarrels. The hot moments are sizzling but the romantic ones are sigh-worthy. Let me point out, though, that there's more to the story than sex and swoon. Both Tess and Hunter have back stories that they need to both work out if there's any hope for either of them to move forward with their lives.

The latter part of the thirteenth chapter up until the fifteenth chapter had my heart squeezing in empathy for both Tess and Hunter, though I will admit that I wish I could have jumped into the book and smacked Hunter upside the head after what he did in chapter thirteen. Aside from the love story, this was also a tale of two individuals trying to be more than their pasts but realizing that these cannot be re-written and that they should make the most of their present and future. I'm looking forward to reading the stories of Flynn Cross and Brody Kane, Hunter's partners at Score Property and his closest friends. This is my first Kate Meader read and I can't wait to read more from her. Even the Score gets 4.5 stars out of five stars. ♥

Pre-order Even the Score on Amazon | B&N | Kobo.