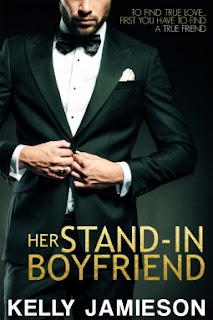 Lexi Mannis's event planning business leaves little time for things like dating and having a boyfriend. So, for occasions that require a date, she turns to her close friend Mac Northrop. He's her stand-in boyfriend and is always there when she needs him--whether it be to put a new piece of furniture together, share a slice of red velvet cake, or just to hang out. What Lexi has no idea of is that Mac's been in love with her for years and one night that has them crossing the line changes the dynamics of their friendship. She wants them to go back to the way things were before they slept together, or maybe even become friends with benefits, leaving Mac to lose hope that Lexi will never see him as anything more as her stand-in boyfriend.

Her Stand-In Boyfriend is a standalone contemporary romance from Kelly Jamieson and was a refreshing take on the usual friends to lovers trope, with the male lead character, millionaire technology entrepreneur Mac Northrop, the one with the feelings of unrequited love instead of the female lead character, self-employed events specialist Lexi Mannis. There's a genuine friendship between the two and an easy camaraderie that's made Lexi feel comfortable in asking Mac to be her date for certain events and vice-versa. When they end up sleeping together, you know that things are going to be different and things didn't go exactly as I would have expected in a story like this, allowing it to stand on its own creative merit.

There are points in the story were Lexi's best friend tells her that she's been using Mac, and I would have agreed if Mac wasn't asking her to be his occasional date as well. I think that the two simply knew that they could count on the other and that there wouldn't be any sort of expectations or strings attached. My heart did kind of break for poor Mac when it seemed that Lexi wasn't getting clued in as to what was going on. They obviously had different expectations, but I don't think it was entirely Lexi's fault. I mean, Mac could have also said something early on, but I guess there was also a fear of rejection on his end. When it comes to love, it takes some longer than others to come to the realization that feelings have grown and evolved.

Lexi and Mac were highly likable lead characters, and while there were a couple of times that Lexi was a tad slow on the uptake, Mac was this great guy waiting to be noticed for more than being the convenient stand-in boyfriend. There was also a bit of oversharing when it came to Lexi and her girlfriends but then it's possible that she didn't feel the need to be more quiet about what was happening between her and Mac because she had yet to realize that it was more than just having sex or being potential friends with benefits. Overall, Her Stand-In Boyfriend was a sweet read, one that will satisfy your need for a quick romance read fix, and something I think friends-to-lovers trope fans will enjoy. I'm giving it four stars. ♥