Review: A Kiss of Cabernet by Pamela Gibson (Love in Wine Country #1) 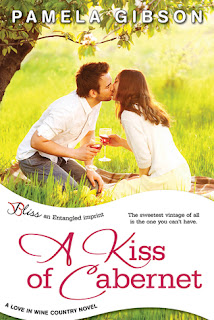 Jake Madison is a successful entrepreneur who finds himself in a bit of a bind, needing to sell one of his business or properties in order to save more vital ones. He's got his eye on Garnet Hill, the vineyard that's been known to harvest grapes for exquisite wines and Jake needs to find out how much its all worth in order to make the best possible decision. He doesn't expect to be met with opposition from vineyard manager Paige Reynoso who has her own dreams of buying Garnet Hill and regain the land that once belonged to her ancestors. However, their mutual attraction starts to vie for their attention more than their respective plans for the vineyard, but can they actually toast to a life together when Jake continues to keep one particular secret from her--a secret he believes is reason enough to not promise Paige forever?

A Kiss of Cabernet is the first story in the Love in Wine Country series from author Pamela Gibson and takes place in Napa Valley, California, where a vineyard manager and her employer fall in love while having very different plans for the vineyard they have their eye on. Paige Reynoso has been planning to buy Garnet Hill once she has the funds to do so but learning that the vineyard's owner has his own plans that involve selling it as soon as possible has her trying to convince Jake Madison that keeping Garnet Hill will be more profitable than getting rid of it. Of course, the two end up spending a great deal of time together and there's an attraction between them, one that they can't keep pretending doesn't exist. The fact remains, however, that Jake needs to sell Garnet Hill and Paige doesn't want him to until she can afford to buy it herself. There's also the matter of Jake's health condition and how it affects the decisions that he has to make with regard to his professional and personal life, which soon includes Paige herself.

It took me a while to get into the story and have any sort of affection for Paige, though I did like Jake straightaway and couldn't help but feel for the guy, what with his problems regarding his business holdings and his health. Paige was obsessed with owning Garnet Hill one day and making Jake Madison keep the property instead of selling was something she did for her own personal benefit, which certainly had me deducting points from her on the likability scale. I also felt she was more in love with Jake than he was with her, and it isn't simply because the one and only time the three words you always expect to find in a romance novel were uttered by her. Her relationship with her father was also strange because I couldn't understand how a parent could blame his own daughter for the death of her then-fiancé and hold it against her simply because of his sexist views. I mean, seriously?! It just made no sense and while he book did have some good moments, I found myself drifting from time to time. A Kiss of Cabernet gets three stars. ♥

Purchase A Kiss of Cabernet on Amazon | B&N | Kobo.