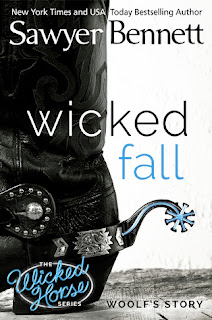 Note: This ARC was provided by Season Publishing via NetGalley in exchange for an honest review.

Wicked Fall is the first book in the Wicked Horse series from author Sawyer Bennett and is about Woolf Jennings, a wealthy rancher who decides to open a private and exclusive sex club with his best friend, and Callie Hayes, the governor's daughter whose had feelings for Woolf since she was a teenager. When Woolf discovers Callie dancing atop the nightclub's bar, he quickly takes her away from the prying eyes of customers. Soon, Callie's working for Woolf at the Double J Ranch and with so much time spent together, the years-long mutual attraction is even stronger than ever. But how can Woolf pursue anything with sweet, innocent Callie and will she still want to be with him once she learns about his sexual proclivities?

The Wicked Horse is actually the nightclub that acts as the front for The Silo, the sex club that is a dream come true for Woolf Jennings, one that allows him to make quite a lot of money while being purveyors of the kinds of kinks and fetishes people such as himself and his best friend Bridger Payne are into. Opening an exclusive and private club that caters to individuals, couples, and groups that have certain preferences on land that's more known for cattle and ranching showcases the kind of character Woolf is. His latest venture is just like him, people see one thing on the outside and have no idea the secrets that are on the inside, shared with those who are open-minded enough to be accepting and respectful of what they find.

For those familiar with Sawyer Bennett's Last Call series will recall Woolf being introduced in the fifth book, On the Rocks, which had Tenn Jennings, Woolf's older brother, and Casey Markham as the lead characters. Even then, one could tell that there was more to Woolf than meets the eye. This story of his was interesting in that he was paired with someone who was more vanilla, or someone whose experiences with sex has been of the more conventional variety. But Callie is a woman in transition and wants to discover a side of herself that may be hiding beneath the surface of conventionality and Woolf was just the man to help guide her on her new journey and there was certainly a lot of exploring these two were doing.

While I did enjoy most of the book, I found myself a tad disappointed with how the end of Woolf and Callie's love story played out. After all, Callie saw a different side to herself with Woolf, one that she actually welcomed, so Woolf's decision came as something of a surprise to me. It felt as if he was giving up a part of himself instead of Callie embracing a part of herself. But yeah, I guess you could also see it from a different perspective and a shift in priorities on the part of Woolf. I was hoping the second book was going to be about Bridger but the epilogue showed that I'm going to have to wait a bit longer. Still, I'll definitely be reading each book in the series and Wicked Fall certainly got things off to a great start! Four stars! ♥