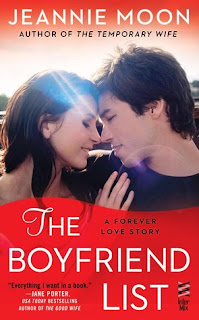 
Jenna Albanese came up with a list of qualities she wanted in the perfect boyfriend but after all years of failed relationships, she doesn't think there is such a thing. Maybe she wasn't meant to have the kind of happily ever after her best friend was experiencing, and she doubts that she'll find it at her best friend's wedding. But when she's partnered with Nate Bayard, one of the groom's best friends, she sees there's a side to the shy and quiet but oh-so-gorgeous and oh-so-rich guy that she's crossed paths with for a year.

Nate Bayard has been attracted for Jenna for months but he's always been hesitant to make a move...until his best friend's wedding. Now, he and Jenna are spending more time together, but Jenna's been hurt and made a fool of by an ex-boyfriend and Nate wants to prove to her that he's nothing like her ex. Can Jenna open her eyes and heart to the possibility of forever with someone who ticks off all the qualities on her boyfriend list instead of living with past mistakes and listening to naysayers who doubt what they have?

The Boyfriend List is the fifth and most recent book in the Forever Love series from author Jeannie Moon. Here we have the third co-owner of Reliance, Nate Bayard, a guy whose always lived a life of privilege but didn't grow up flaunting it. Nate's a genuinely nice guy, somewhat shy but and far more of the silent type compared to his best friends and business partners, Jason Campbell and Owen Kent. He's had a crush on Jenna Albanese since first meeting her but Jenna's last boyfriend was a rich guy who took advantage of her love and trust and now she's wary of men like him. Of course, Nate is nothing like Jenna's ex and the two decide to pursue a relationship, one that begins with a lot of support from the people around them, only to have some of those closest to them question Jenna's true motivation and intent.

This was a cute love story that involved a so-called boyfriend list that Jenna came up with when she was a teenager, only to end up with failed relationships as she was getting older. Jenna seemed like a genuinely nice girl, someone who fit in well with Nate, but she was saddled with a heck of a lot of insecurities and doubts that tended to plague her on and off and short of me jumping into the book and making her see things more clearly, it tended to become tiresome at certain points. There were some people who doubted Jenna's intentions in becoming involved with someone as well-off as Nate and I did wonder about one of them in particular, simply because that person was married to someone who was quite close to Jenna. I would have wanted Jenna to stand up for herself a bit more instead of Nate always carrying that burden.

The ending of the book felt different from those of its four predecessors and I'm still having mixed feelings about it. I liked that it wasn't like all the others but there was also a part of me that was a bit iffy. Also, I couldn't help but feel that between the two of them, it was Nate who made certain changes in order to make Jenna happy, while Jenna didn't really evolve as much as I would have preferred as a character. Of course, we've still got the overly involved families and circles of friends and we're able to see how far the couple from the first four books have come. There's a sixth book set for release involving Tristan Ward and Leah Bayard, but I am curious if there'll be one involving Joelle "Joey" Torres, the younger sister of Kim Kent (nee Torres). Until then, check out and enjoy the first five. The Boyfriend List gets four stars. ♥