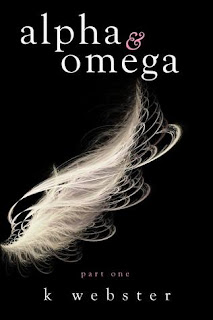 Note: This ebook was provided by IndieSage PR in exchange for an honest review.

A single tear rolls down her cheek as she nods at me. Whether or not she wants to believe it, I see it lying there just below the surface--the hope, the love. She may think I'm insane because my heart and soul decided to fuse themselves to hers, but she's just as guilty even though she's too afraid to voice it.

Lark Miller stopped living her life six years ago. Now, she's merely waiting for the inevitable to happen so she can finally find some semblance of peace. She's been barely existing 'til she meets her deadline, but then she meets a stranger named Al. He's got a poet's soul, but there's something about him that awakens her soul and breathes life into her non-existent heart. He makes her feels things she hasn't felt in six years but he's keeping secrets from her, secrets that could cost them heartache and absolute pain for all eternity.

Alpha & Omega is the first part in a duet from author K. Webster and is a paranormal romance about a Minder, someone training to become a Seraph Guardian, also known as a guardian angel, named Alpha and the broken woman named Lark Miller who becomes his final assignment before he earns his wings. He's read the file on her, but something about Lark tells him that there's more to her story than what's been documented by those in HEA, the company he works for. He needs to stay focused on the task at hand--to make sure Lark stays alive for the next three months before a reaper from HEL comes for her--but Alpha finds himself wanting to know the woman behind the sadness and begins to fall in love with her, something that he shouldn't allow himself to do because the distraction could spell failure of his mission.

There was something hauntingly beautiful about the story of Alpha and Lark. It was dark but never failed to have that glimmer of light that made me want these two to get to their happily-ever-after, even if the idea of a would-be guardian angel and a depressed human being together seemed almost improbable. But that's the thing with stories like these--they give you that feeling of hopefulness and make you believe in things that come off as impossible. My heart broke for what Lark went through but it cheered for the fluttering of feelings that soon evolved into much more between Lark and Alpha. There's a twist in the story that I figured out very early on, but it's revealed and then resolved in ways I didn't expect. I loved that this was fantastical yet still felt very real in its story of the undeniable power of love, faith, and hope.

I read this book in one sitting and fell in love with both Alpha and Lark and their imperfect perfection. Of course, they weren't the only ones who had my attention; Alpha's best friend and partner, Omega, was difficult to miss and his dysfunctional affair with Lovenia, a leviathan from HEL certainly had my curiosity piqued. Their story is further explored in the sequel, but I'll save my comments on that book in my next review. Overall, Alpha & Omega is a book I would happily recommend to other bookaholics and I give it props for its originality and in the author's ability to tell a somewhat complex story in an easily understandable manner. This was my first K. Webster read and I need to thank Nicole of IndieSage PR for sending the ebook to me before I headed into the sequel. This is a 2015 favorite and gets five-plus stars! ♥