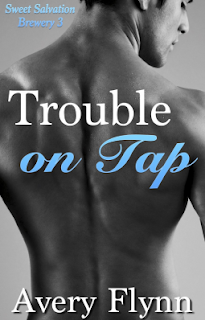 Trouble on Tap is the third book in the Avery Flynn-penned Sweet Salvation Brewery series and finally turns the spotlight on the last of the Sweet triplets and former supermodel Olivia and her second chance romance with war veteran turned Salvation police chief Mateo Garcia. They used to meet up for sex every few months, but their last meeting three years ago ended abruptly when Olivia wanted more and Mateo turned her down. Now, Olivia's back in Salvation, the town that's looked down on their family for generations, and the last person she expects to bump into Mateo, who is no longer the easygoing guy he used to be, due in large part to the loss of his team and the physical and emotional scars that he's left with.

Olivia is one of those female lead characters who has something to prove and I like that she's got gumption and refuses to be told there's something she can't do. She may be considered the wildest among her sisters but I prefer seeing as more of the risk-taker. She doesn't allow Mateo to push her away because she knows that the man she fell in love with years ago is still somewhere underneath the tough and scarred exterior he shows to the rest of the world. Her naked photos may be all over the internet but she holds her head up high even after the unthinkable betrayal of her ex-boyfriend. Don't think though that the book is all about drama and angst because there is a fair bit of humor that goes on and the ending does leave you smiling.

The connection between Olivia and Mateo is undeniable and while it may have taken Mateo a tad longer than Olivia to get to the whole love part, these two were simply destined to be together even after three years apart. The addition of a dog named Trouble made gave the story an extra dose of sweetness that I can fully appreciate because I'm a sucker for any romance that involves a dog. Fans of the series will be happy to note that since the triplets are now together, we get a glimpse of where the two other relationships are at and I can undoubtedly say that I actually liked how the trilogy wrapped up. All three books can be read as standalones but check out the entire series anyway. Trouble on Tap gets four stars. ♥