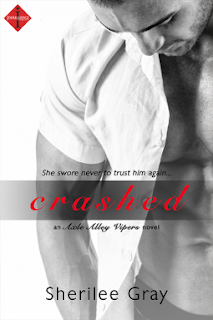 Alexandra Franco has been in love with Deacon West since she was fourteen, but after giving him her virginity at the age of eighteen, all she got in return was a broken heart and the realization that she may have been good enough for him to sleep with but not to marry. And then she goes ahead and sleeps with him after the death of his father, a man Alex considered family, and now she's forced to see Deke in order to get answers as to why he plans on selling the very building that houses the garage that she and his sisters own and work at. The last thing she expects is for him to offer her a deal: agree to a three-month-long affair with him and he won't sell the building. Alex can't believe this is the same man she fell for years ago, but Deke has his reasons for pushing for this deal. It'll give him the only girl he's ever loved: Alex.

Crashed is the first book in the Axle Alley Vipers series from Sherilee Gray and is about Alexandra Franco and Deacon West, two individuals who were friends that shared an unforgettable night together years ago only to have their hearts broken soon after. While Alex believes that it was only she that suffered the heartbreak, Deke has suffered right alongside her but he kept it hidden from everyone else. He had his reasons for marrying someone else but after finally getting divorced and enduring the loss of his father, Deke is ready to go after "the one". His way of doing so may be rather unorthodox and it could very well bite him in the ass but I'm guessing that desperate times call for desperate measures, especially since he knows how much he hurt Alex years before and that she wouldn't be open to trusting him right away.

This was a second chance romance that had the interesting twist of Deke using a supposed deal to be able to spend time with Alex and get her to trust him again. From the moment he mentions the deal, you know it's going to backfire sooner or later. Then you add in hiding what's going on from Deke's sisters, Piper and Rusty, which was a tad silly since Alex lives in the very same building where the garage is housed and Deke's visits are going to go unnoticed forever. Deke's handling of his ex-wife and keeping that a secret as well had "disaster" written all over it. But while there were some things that bugged me about the story, I did like that Deke and Alex had to overcome more than just what happened between them when they were younger and needed another chance to finally get their happily-ever-after. Crashed gets four stars. ♥