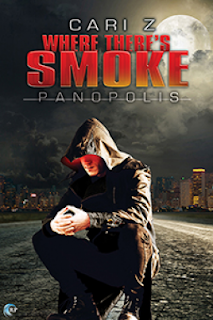 Edward Dinges was nothing more than a recent transplant to Panopolis. His job as a bank teller is not the kind you would really write home about. While he himself isn't all that remarkable, Panopolis is the kind of place where remarkable things--things like Heroes and Villains fighting for dominance--are commonplace. One day, Edward finds himself caught in the crossfire when a Villain known as the Mad Bombardier decides to rob the bank Edward works at but finds himself trapped when a Hero swoops in to save the day. However, it's Edward who ends up doing the saving but decides to help out the Villain and not the Hero. Edward soon finds his life changing and with it, he'll have to choose between two factions.

Where There's Smoke, the first novella in the Panopolis by Cari Z, is an urban fantasy story about Edward Dingus, man who is as ordinary as you could get but whose life becomes extraordinarily complicated after he helps out the Mad Bombardier during a bank robbery. The story was originally creative and sparked a debate in my head: are heroes and villains really a simple case of good versus evil? The posts from SuperTruther, an anonymous entity, whether individual or otherwise I'm not one hundred percent sure since I do have a tendency to go with the whole conspiracy theory idea, get you thinking that not as all as it seems in Panopolis and Edward Dingus is about to discover exactly that in the ways he never imagined.

The love story between Edward and Raul Tremblay, aka the Mad Bombardier, was actually a simple and easygoing one that was set against a backdrop that blurred the lines between who were really heroes and villains. I liked that Craig, aka Freight Train, had a thing for Edward so you had the normal guy having a villain AND a hero attracted to him. Raul's back story was interesting in that it shows he isn't like every villain in Panopolis. The book does end in a cliffhanger that makes you realize that there's more that awaits Edward and Raul. Where There's Smoke is a really quick read but one that packs a punch, so if you're looking for something different in a totally awesome kind of way, check this novella out. Five stars! ♥