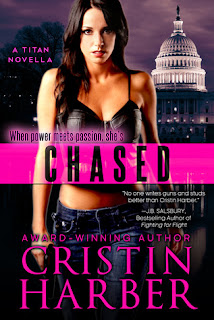 Chased is a novella in the Cristin Harber-penned Titan series and is about Jenny Chase, younger sister of Lilly "Sugar" Westin and sister-in-law of Jared Westin and Asher McIntyre, a congressman with a promising career in politics. Jenny and Chase have been flirting for years but have never really crossed the line. After all, Jenny is the best friend of Asher's younger sister so he's always seen her as a no-go zone. He also doesn't make it a secret that his political ambitions take precedence to his personal life, and too many rejections have made Jenny keep her distance from Asher. But when the lives of Asher's sister and Jenny are threatened, Asher realizes he's not willing to lose the girl he's always had feelings for without a fight.

We get bits of Jenny in Westin's Chase, the third novel in the series, and I'll be honest and admit that it took me a few pages to realize how this story was connected to the rest of the books. Since there was a stalker and Asher was a member of Congress, I assumed the Titan Group was going to become later on in the story, but I didn't realize that Jenny was Sugar's sister until about the sixth chapter, which is more than halfway into the book. I feel rather sheepish about the whole thing, actually. I also kept thinking that one of the FBI agents was the actual stalker, so yes, yet another miss on my end. If you could see me now, I'm sitting in front of my computer and actually shaking my head in shame. I do not like getting things wrong.

The story is a pretty good one and the suspense and mystery that fans of the series always look for is very much present. Both Jenny and Asher have the whole friends-to-lovers vibe going and I'm glad the will-they-or-won't-they angle we see in novels that have the same trope wasn't too much in play here. Do I think that this novella is essential to the series? Not really, but there's something that involves Rocco Savage, team leader of the Titan Group, and the effects of that event come into play in the next full-length novel in the series, Savage Secrets, so I will suggest that you read this novella before going into that particular book. Or better yet, just read the entire series. ^.^ This sixth release gets four out of five stars. ♥