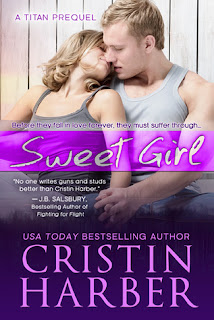 Sweet Girl is a prequel novella that comes before the second full-length novel, Garrison's Creed, in the Titan series from Cristin Harber. Nicola Hart is the one girl Cash Garrison has always wanted but can never have. They've been the closest of friends for years but she's his best friend's younger sister and Cash can't risk losing either of them if he crosses the line. When the time finally comes for them to acknowledge what's been simmering between them for far too long, it's everything they could  have ever dreamed of...until fate interferes with their happily-ever-after.

This is the one book in the series that's marketed as a non-standalone and must be read prior to reading book two. It tells the story between Nicola Hart and Cash Garrison, both college students--she a sophomore, he a senior--and friends who've had feelings for one another for years but haven't done anything about them. This doesn't have the same action that you would expect from a Titan novel and the title is actually quite apt--it's a bittersweet love story with a hint of mystery and suspense and it does end in a cliffhanger so prepare to be a wee bit frustrated.

Is it necessary that you read this novella before heading into the second book? Not really, but if you're anything like me, you'll want to read it so that you can have the back story that'll give you a more complete picture of why things are so intense between Nicola and Cash. This also introduces readers to Roman Hart, Nicola's brother and Cash's bet friend, who is also a member of the Titan Group for the rest of the series but isn't mentioned in the first book, unlike Cash. Sweet Girl is a fairly quick must-read and is available for free on e-retailers. This gets four stars. ♥