Review: Drunk on You by Teri Anne Stanley (Bourbon Boys #1) 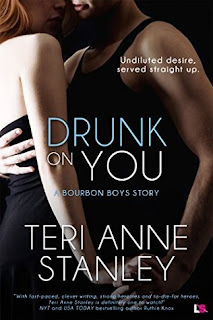 Allie McGrath had her heart broken by Greg Morgan when she was eighteen but he had no idea that he had hurt in any way, shape, or form. Years later, he comes back from Afghanistan, but he's no longer the same easy-going guy he once was. Both he and Allie lost the person closest to them--Allie's brother and Greg's best friend, Dave McGrath--in Afghanistan and Greg promised Dave that he would watch over his friend's baby sister. Only now she's all grown up and is stirring up feelings in Greg that he can't help but feel guilty over. Maybe the best way he can keep his promise is by helping Allie with her special concoction of flavored, un-aged whiskey. Convincing their parents to have the distillery they own that it's a profit-earning drink worth producing will be hard, but can they convince themselves that all they are is friends?

Drunk on You is the first book in the Teri Anne Stanley's Bourbon Boys series and is a falling-for-your-best-friend's-younger-sister story between Allie McGrath and Greg Morgan. Allie's had feelings for Greg since she was a teenager but he unknowingly broke her heart when she realized that he would never see her as anything more than his best friend's kid sister. Years later and after the death of his best friend, Greg returns home but doesn't want to work in the distillery the McGraths and Morgans co-own. The thing is, he made his best friend a promise to watch over Allie and helping her out with her latest project--an alcoholic concoction called Rainbow Dog--could be the fulfillment of that promise. And while they're both attracted to each other, it's made more complicated by Greg's promise to Dave and the return of Greg's ex.

While the trope itself is one that's been played out in countless books before, I loved that this story was set in the world of bourbon and distilleries, not that I'm an actual fan of alcoholic fare. It just gave the story a different feel, allowing it to set itself apart from other books with the same basic story line. Allie and Greg were good as main characters and there was that much needed tension going on between the two of them, especially as they made their way from one place to another, trying to find investors for Rainbow Dog. They both have issues with their respective families, plus Greg was dealing with the guilt he was feeling over Dave's death and Allie was trying to get Rainbow Dog off the ground. Still, it wasn't all drama or angst because there were lighthearted and humorous moments in the story so it never felt depressingly heavy.

The blurb on both NetGalley and Goodreads have the male lead character listed as Justin Morgan, and since what I received to review was an advanced reader's copy, I can't really be sure if the published version will have the guy as Greg or Justin. Personally, I like the name Justin better, but hey, that's just me. Other than that little hiccup, the book does well as the beginning of the series, allowing readers to get to see potential main characters for future installments. I'm guessing one book will be about Greg's older brother Frank and one book will be about Allie's older sister Eve. Take note, though, that the names could be different for both Frank and Eve, so let's just say my guess is that the main characters' older siblings will get their own stories in the future. Drunk on You was a fun and entertaining read. It gets four stars. ♥

Purchase Drunk on You on Amazon | B&N | Kobo.