Book Spotlight: Focus on Me by Megan Erickson 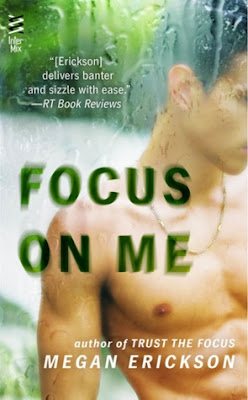 About Focus on Me
Colin Hartman can now add college to his list of failures. On the coast-to-coast trek home from California, Colin stops at a gas station in the Nevada desert, and can’t help noticing the guy in tight jeans looking like he just stepped off a catwalk. When he realizes Catwalk is stranded, Colin offers a ride.

Riley only intended to take a short ride in Colin’s Jeep to the Grand Canyon. But one detour leads to another until they finally find themselves tumbling into bed together. However there are shadows in Riley’s eyes that hide a troubled past. And when those shadows threaten to bury the man whom Colin has fallen in love with, he vows to get Riley the help he needs. For once in his life, quitting isn’t an option…


Read my five-plus-starred review for Focus on Me. 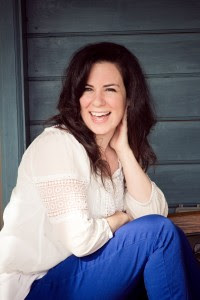 Her first stories written in crayon-scrawl on loose-leaf notebook paper were about her childhood pet — a deaf cat with dandruff. And after covering real-life dramas as a journalist, she decided she liked writing her own endings better and switched to fiction. Her romance novels full of humor and heart are a far cry from those early scribblings about her hygiene-deficient pet.

She lives in southern Pennsylvania, with her husband, two kids, and two cats. She likes a good pint of beer, a greasy bacon cheeseburger, homemade mac and cheese, and a great book with a happily ever after. When she's not tapping away on her laptop, she's probably listening to the characters in her head who just. Won’t. Shut. Up.

Excerpt from Focus on Me
My boots made an odd sound on the Skywalk. I watched them as I raised my knees up, forward, then down onto the clear glass floor, from which I could see the bottom of the Grand Canyon two thousand feet below.

My legs shook, and my heart felt like it was beating in my mouth. I wiped my forehead with the sleeve of my shirt and breathed in through my nose, out through my mouth.

This whole thing was weird and freaky. But the bridge was a little crowded, and Riley seemed to like it, so I shut my mouth and fought against my flight instinct. Still, I gazed longingly at the solid ground at the edge of the Grand Canyon. According to the shuttle driver, the U-shaped Skywalk jutted out from the rim of the Grand Canyon seventy feet at its farthest point. Which was where we were.

Riley leaned on the railing and looked below. I followed his gaze, spying the Colorado River in the distance.

I walked over next to him and folded my forearms on the railing, resting my forehead on them and closing my eyes. Then I prayed my legs would stop shaking.

When I looked up, Riley was watching me with amusement.

He laughed. “Liar. Your face is white and you’re sweating like crazy.”

I wiped my forehead again. “Hot as hell out here. This is Arizona, ya know.”

“Right . . .” He let his voice trail off and then focused back on the canyon in front of us. I told myself to chill and let my gaze roam the area. I’d seen pictures of the Grand Canyon, but to actually be here in this huge natural area was a head trip. I was seeing it with my own eyes, but could barely grasp the actual freaking size of the canyon.

A helicopter circled overhead, one of the tours, and I looked up, shielding my eyes as it flew past.

“Have you ever seen Garden State?” Riley asked.

I dropped my hand back to the railing. “Garden State?”

He swallowed and looked back at the canyon as he spoke. “Well, the main character is depressed, and he’s been on drugs a lot of his life to deal with it. But then he stops taking them. He said he wants to feel, and he wasn’t sure he ever needed them in the first place.” He took a breath. “Anyway, there’s this scene where he and his friends visit an abandoned quarry. He climbs on top of this old construction vehicle in the pouring rain on the edge of the quarry and yells down into it. Just yells into the infinite abyss, as he calls it. And he’s happy because he’s feeling that moment, you know?”

Riley looked at me, his eyes wide. I didn’t know what he wanted me to say. Because that sounded kind of weird, for a guy to stand and yell into a hole. Maybe he just wanted to hear his voice echo. Some guys liked to hear themselves talk. So all I did was nod.

In response, Riley stepped closer. When he spoke again, his voice was lower, softer. “Standing here like this, how does it make you feel?”

I licked my lips and broke Riley’s gaze to look at the other people walking the bridge. Some were holding hands and talking. Others were pointing at the canyon below. Then I looked back out, staring at the tan rocks of the canyon walls. The best way to describe all of this was beautiful, in the way the sun baked the ground, the way the gentle breeze ruffled my sweat-dampened hair. The way plants shoved their way through cracks in the rock to reach the sun and thrive.

I wasn’t so good at this, talking about how I felt and shit. But he’d asked me, so I thought about how to answer as honestly as I could. “I guess . . . I guess I feel pretty small. And I feel pretty lucky that I’m here. I’m alive and the sun is shining, and I get to see one of the greatest sites in the world.”

I winced a little, wondering if that all sounded stupid.

Riley rolled his lips between his teeth, and his eyes lowered until he stared at his hands folded on the railing. “That’s . . . that’s good, Colin.”

Riley’s eyes fell closed slowly. “About the same,” he whispered. But there was something in his voice, something that made me scratch my head, but also made me think he was lying a little.

“You happy you got to see this?” I waved a hand out into the infinite abyss.

“Yeah,” he whispered again. But he didn’t look happy. And his eyes looked wet.

He blinked and turned away, and when he faced me again, some cool mask had slipped over his face. His eyes looked a little too bright, his smile forced. “Thanks a lot for bringing me.”