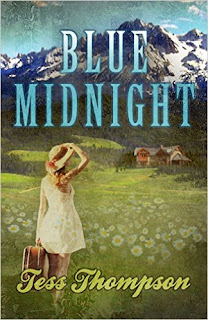 Note: This ebook was provided by Booktrope via NetGalley in exchange for an honest review.

I look out at the Idaho sky right now and it is the bright blue of midafternoon and I wonder, had you stayed would it have changed you, made you more expansive, more willing to take a risk and choose the path not taken?

Thirteen years after he kissed her goodbye, handing her a scrap of paper that had his name and phone number. He hoped that she would change her mind and come back to him. Instead, Blythe Heywood would push through with her wedding, have two daughters, and stay married for twelve years. When her husband files for divorce in order to marry the woman he's been having an affair with, Blythe finds herself moving to a new house and starting over with her two girls. When she finds the piece of paper with Finn Lanigan's name and number on it, she takes the advice of her sister and heads to Peregrine, Idaho, the place she remembers as being Finn's hometown. There, she hopes to cross paths again with the man she didn't choose but Blythe is about to discover things about Finn and his family that will change her destiny.

Blue Midnight is the first book in the Blue Mountain series from author Tess Thompson. I actually thought this was a standalone and only realized today that it was part of a series, which is a good thing because by the time I had finished reading, I couldn't help but wonder about the other Flanigan siblings and what their stories they had waiting to be told. This was originally released in 2014 and I can't believe it's taken me over a year to discover this gem of a book! The story was wonderfully written, with a descriptiveness that made it easy for me to visualize lead character Blythe Heywood and her surroundings. The choice she made thirteen years ago set her on a certain path, one that has ended in a way that she never saw coming and the re-discovery of a piece of paper has her wondering if she should have gone a different route back when her destiny was in her hands. As the saying goes: hindsight is always twenty-twenty. Recapturing one's past is difficult, especially when one's circumstances have drastically changed.

There are a number of twists in the story, and I don't want to spoil the reading experience of those who, like me, are only coming across this book now. I will say, though, that the story is as much about family as it is about Blythe's journey of self-discovery and love. There's a mystery within the Flanigan family that calls to Blythe and she quickly realizes that she wants to find out the answers to the questions that have been lingering for three years as much for herself and her own peace of mind as for the family and the bring back a sense of peace among the family members. The mystery had me going in a couple of different directions before the revelation as to who was behind it came about and I was actually quite stunned. Looking back, though, the clues were there and I was just too caught up in everything that Blythe was seeing and experiencing to really take note of them all and who they were pointing to. How it played out brought a bit of suspense thriller into the story, adding a hint of anticipation as to what would now unfold.

This is one of those stories that sneaks up on you, catching you off-guard with its quiet and simple intensity. The characters are far from perfect but they are very human and not at all difficult to empathize with. Blythe's life is in flux for the first time in years and you see her trying to get her footing time and again. You want her to find happiness and to be able to live the rest of her life with the kind of love that she had at the her fingertips but let go of thirteen years ago. I believe everyone is blessed with free will, allowing them to make decisions and choices that will set them on various paths and there's never a guarantee that those paths will be straight and free of obstacles. If anything, you can be sure that those paths will be winding and will have you stumbling every now and again. But you can always change the path you're on and change the direction of your journey, just like Blythe Heywood did in a small town called Peregrine in Idaho. Blue Midnight is a highly recommended 2015 favorite and gets five-plus stars. ♥