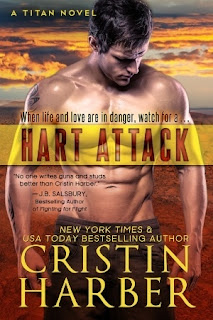 Hart Attack is the seventh book in the bestselling Titan series from award-winning author Cristin Harber and is about Roman Hart, Titan Group's resident spotter, and Beth Tourne, a CIA agent that wants to get back in the field. Roman and Beth have been flirting incessantly for over a year, playing a game they're not sure they want to win or lose. Beth knows what it feels like to be left behind by the man she loved and the guilt she feels over the role she played still haunts her. Roman may not admit it but the faked death and unexpected return of his sister is something that still weighs on him, leading him to steer clear of any sort of commitment. They're two people who should be keeping their distance from one another but the pull between them is strong and they'll have to trust it if they want to make it out of their joint mission alive.

The whole flirting thing between Roman Hart and Beth Tourne started in the second full-length novel in the series, Garrison's Creed. Roman may be her best friend's older brother but that's not what's stopping Beth from pursuing anything more. She never fully recovered from a tragedy she never anticipated happening and Roman is the first man since then that's made her feel. On the other hand, Roman's always been protective and he goes in full mode when he teams up with Beth. Getting too close to her could open him up to the possibility of feeling loss should things not work out. His sister Nicola may have returned from the dead but losing ten years with her showed him the kind of pain he doesn't need a repeat of. Both Roman and Beth have more in common than mutual attraction and had hurdles they needed to overcome.

I'm glad that Roman and Beth finally got their story told and that all that flirting actually resulted in a love story that was surprisingly deeper and more angst-driven than I anticipated, considering the thing between them started of as a harmless game. Beth's back story was a shock because she always came off as someone who knew how to have a good time and Roman was obviously still dealing with the return of his sister even though they're still as close as ever. Theirs was a case of delayed gratification and I'm glad that they didn't suddenly jump into bed in the first couple of chapters because then it wouldn't have been as satisfying when they finally did. These two had to work on their trust issues, especially when it came to trusting their feelings for one another and opening themselves to the possibility of finally falling in love.

Aside from the Roman and Beth romance, I enjoyed the roles that Cash and Nicola Garrison played in the story, both from the love story and the mystery suspense aspects. Of course, the rest of the Titan Group were in full force and I couldn't help but smile when it came to Jared and his obnoxiously endearing ways. I know that the full-length novels can be read as standalones, but I've always been the kind of reader that encourages others to read a series in the proposed reading order and the same goes for the Titan series. With each additional book, you can see how the relationships of characters who already had their time in the spotlight have progressed and further evolved. Hart Attack is definitely one of my favorite books in the series and pushed the bar even farther for the next one. It's a must-read and gets five out of five stars. ♥