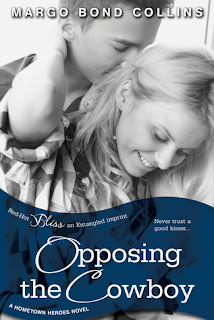 He may have thought she was a flaky environmentalist hippie but landman Jonah Hamilton soon discovers that ranch owner and yoga instructor LeeAnn Walker sticks by her principles and that includes not allowing the company he works for to drill for oil on her property. Unfortunately for LeeAnn, she may have no say in the matter if it's proven that she doesn't own the mineral rights. Proposing that they work together to find documentation regarding said rights, Jonah finds himself wanting to spend more and more time with the quirky, new age cowgirl he's can't help falling for.

Her grandmother left her a ranch that's costing more and more money to care for and while she's had to sell off parts of it, what she has left is precious to LeeAnn Walker, and while Superman-lookalike Jonah Hamilton kisses like a dream, he isn't going to be able to convince her to allow oil drilling on the land. Looking for papers to show who the mineral rights belong to have them spending time together and allows LeeAnn to see Jonah as more than just her nemesis. But LeeAnn's been betrayed before and trusting Jonah could mean losing her right to protect her land...and her heart.

Opposing the Cowboy is the second book in the Hometown Heroes series by Margo Bond Collins and is about a young woman desperately trying to protect her ranch and land from being infiltrated by an oil and gas company and is being represented by their landman. LeeAnn Walker and Jonah Hamilton's initial meeting has them sharing in a kiss meant to show LeeAnn's ex that she's moved on and it proves to be an unforgettable kiss since the two think about it constantly afterward. Memorable kiss or not, LeeAnn and Jonah are on opposite sides when it comes to allowing Jonah's company to drill on LeeAnn's land. The story has an enemies to lovers feel to it and the two lead characters shift from being attracted to each other to battling one another. They both have preconceived notions of what the other represents but spending more time together has them slowly changing their minds.

There's chemistry between LeeAnn and Jonah and while I did think LeeAnn's sudden shifts into yoga poses while she's stressed was strange, she was a female lead character who had conviction and refused to be swayed by financial gain for herself. I think she's also the first cowgirl who happens to be into yoga and vegetarianism that I've come across in my book adventures, so she definitely stood out. Then there's Jonah who I didn't like all that much in the beginning since he was too used to using all that charm and good looks to get land owners to sway his way. He did, however, turn my opinion around as the story went on and he proved himself to be a nice guy who really cared about LeeAnn. I liked that their love story was more of a slow burn and nothing was rushed or could be labeled as insta-love or insta-lust. Opposing the Cowboy was a good follow-up to the first book and gets four stars. ♥