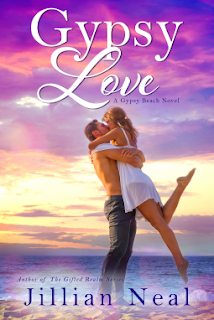 Gypsy Love is the second book in the Gypsy Beach series from Jillian Neal and is about two people trying to regain their footing professionally and learning that there really is such a things happily-ever-after. Arley Copeland is not only dealing with her family believing her writing has brought nothing but shame and ridicule to the legacy her late father, an award-winning writer, left behind, but she's also saddled with the knowledge that her books can no longer be published or sold because the publishing house has filed for bankruptcy. Some time away at the Gypsy Inn could help get her plans in order as well as get rid of her writer's block. Then she meets divorce lawyer John Rowan, a man who offers his expertise and comfort.

John knows what the statistics are like when it comes to marriages and he's not one to believe in happily-ever-afters or any of that nonsense. The abandonment he and his mother endured from his father has shaped him into the man he is today. Meeting author Arley Copeland at the bed and breakfast his best friend's fiancée owns has him refocusing his energies on helping her out and in the short amount of time they're together, his feelings for her develop quickly. But for a man that doesn't believe in marriage or in committed relationship lasting for a lifetime, John isn't sure if he's ever going to be ready to give Arley exactly what it is she's looking for. If ever he does become ready, it could be too late for him and Arley.

Though this does have quite a bit of insta-love going on, John Rowan and Arley Copeland's love story was an enjoyable read. They've both got family issues: Arley with her mother, sisters, and other relatives who look down on her being a published writer of romances, thinking it's nothing more than glorified porn, and holding her inheritance from her late father hostage because of it and John with his father's abandonment and trying desperately to make up for the man's mistakes. They're exactly what the other one needs, providing understand, support, and acceptance and opening their eyes to the possibility that someone will love them for who they are and not expect hem to change or be someone who they aren't.

I do have an issue with the incessant use of certain so-called terms of endearment, i.e. baby girl, little girl, good girl, sweet girl, and baby doll. It was overly repetitive and the fact that some of those terms were the same ones John used when talking to his goddaughter Evie made me want to gag. It's one thing to use them on a child but to use the very same terms with someone while you're having sex is just...blech! Plus, Arley isn't a girl; she's a woman, for heaven's sake! There was nothing endearing about the usage and it simply came off as demeaning, in my opinion. And yes, it did affect my overall impression of the book, though I did enjoy this second book more than I did the first one. I'm giving Gypsy Love four stars. ♥