Review: Caught Up in the Touch by Laura Trentham (Falcon Football #2) 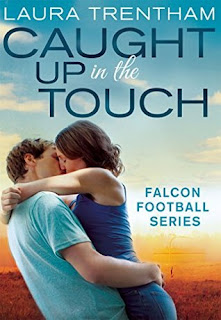 Caught Up in the Touch is the second book in the Laura Trentham-penned Falcon Football series and is the love story of Logan Wilde and Jessica Montgomery, two people whose paths cross with the "help" of two of the unlikeliest sources. Falcon, Alabama is about to open city girl Jessica Montgomery's eyes to just how good life can be away from the hustle and bustle of the concrete jungle when she's sent there by her father to convince restaurant owner and chef Logan Wilde to manage the Atlanta restaurant owned by her father's company. He's already turned down the offer before but Jessica's father wants her to use whatever means necessary, even using her feminine wiles, to get Logan to sign on the dotted line or else she can kiss her promotion as Montgomery Industries' CFO, the position she's worked hard for, goodbye.

Logan Wilde loves living in his hometown of Falcon, Alabama, staying close to his cousin and his best friend, surrounded by places and faces that are all familiar to him. He's enjoying the best of both worlds--helping out with the high school football team as its strength and conditioning coach and making a name for himself with Adaline's, his restaurant where he creates homestyle recipes that have people coming back for more. When Jessica Montgomery shows up offering him a job with all the bells and whistles in Atlanta, Logan isn't even tempted...unless you count the woman making the offer. He wants to learn more about the woman behind the cold and ambitious exterior. Soon, they're falling in love, but when family woes threaten to wreak havoc on their relationship, Logan and Jessie find themselves caught in the fallout.

That's two for two for Laura Trentham and her Falcon Football series! Sequels are often caught in the unenviable position of, at the very least, matching the positive response received by its predecessor or surpassing it altogether. This second book in this series has kept up the momentum started with the first book and even gets you excited for whatever may be up next. Personally, I'm hoping for Lilliana Hancock and Alec Grayson to get their time in the spotlight in the third book, but I digress... Both Logan Wilde and Jessie Montgomery may not appear to have much in common but, in reality, they've been affected by the actions of their fathers and are trying to lead lives free from their machinations. They've both sought some sort of approval from their fathers but have realized that some things are not worth the heartache.

While Logan and Jessie's feelings for one another appear to have developed at a much faster pace than Robbie Dalton and Darcy Wilde's in the first book, they still go through a lot of adjustments, especially since Jessie tries to acclimate to life in Falcon. These two were sweet together and an absolute match made in small town romance heaven. I loved how they accepted one another's pasts and were able to bring out the best in each other. As was the case with the first book, there's an underlying but important issue that's brought up here--i.e. book one was about being gay and book two was about PEDs--and I appreciated how these were highlighted instead of being minor events in both books. I'm highly encouraging you guys to check out Caught Up in the Touch once it's available at all e-retailers. This second book gets five stars! ♥

Pre-order Caught Up in the Touch on Amazon | B&N | Kobo.