Review: Over the Top by Rebecca Zanetti (Maverick Montana #4) 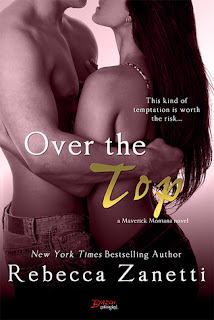 Hawk Rain has wanted only one girl for as long as he can remember, but it's no secret that Dawn Freeze's brothers would have his hide if he ever pursued their baby sister. The fact that he hasn't been able to stay in their hometown of Maverick, Montana on a permanent basis is yet another reason he's been hesitant to start anything with Dawn. But just as he's ready to finally go after the girl he has feelings for, an enemy decides to take the fight to Hawk's home turf, which puts the people he cares about the most in harm's way. Now, for Hawk and Dawn to even have a chance at happily-ever-after, he'll have to show her a side of him that he's only reserved while at war or pursuing those eluding justice, a side that may scare her away.

Over the Top is the fourth book and the newest release in the Maverick Montana series from the one and only Rebecca Zanetti. After three books that have increasingly hinted at the feelings that Dawn Freeze has had for Hawk Rain and that her brothers have never thought their becoming more than friends would be a good thing, fans of the series finally get their love story! Let it be said that Dawn's brothers have been hesitant about a Dawn-Hawk relationship because of Hawk's post-traumatic stress disorder issues, plus the face that Dawn is their youngest sibling and they'll always see her as their baby sister, and not because they didn't think he was good enough. Ah, to have three very over-protective brothers...sweet and scary!

Hawk has many attractive qualities, one of which is his sense of loyalty to those closest to him, but he's loyal to a fault, putting everything else aside to keep a promise he made to a friend who was betrayed  and injured alongside him by someone they thought they could trust. It's almost as if he has blinders on and he doesn't divulge much information to Dawn or the Lodge-Freeze brothers. I couldn't help but feel bad for Dawn because she seemed to have to take a backseat to whatever Hawk was part of and just when they're finally doing something about their feelings, she's still not the priority. Some things are worth waiting for, but sometimes, you get tired of waiting and need to just move forward instead of feeling stuck in neutral.

This book also sees the return of Reese Johnson, a supporting character introduced in the second book, Under the Covers, and is a friend of Hawk's and the ever-growing Lodge-Freeze family. With all the siblings now having their stories over and done with, I'm going to cross my fingers and hope that Reese moves to Maverick and has his own story told. If I could do my own matchmaking, I'd pair him up with Anne Newberry. Oh, and there's also bar owner Adam (whose last name was never mentioned, I think), who may fit well with Luann (whose also has no last name) ... Yes, I refuse for the Maverick Montana series to end. Do you hear me, Rebecca Zanetti?! ^.^ I loved Over the Top and am giving it 4.5 stars. ♥