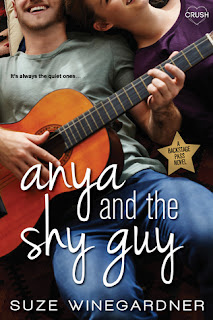 Anya and the Shy Guy is the fourth novel in the multi-authored young adult (YA) Backstage Pass series and is the debut from author Suze Winegardner. This time around, we've got eighteen-year-old Will Fray, the Seconds to Juliet member dubbed as the "shy guy", and nineteen-year-old Anya Anderson, an aspiring journalist sent to join the S2J tour and report on behalf of an online site. The thing is, Anya's been assigned to one specific member--Will--and what she really needs is some sort of scoop or angle that'll help her get a bigger paycheck and keep her off the streets and out of homeless shelters. But how can she do that if she's stuck with the one guy in the band who's known for being shy and quiet?

The thing is, Will's got himself a secret that, if ever exposed, would put his family and the band at risk. You see, Will Fray isn't Will Fray. He's actually Matt Fray, Will's twin brother and the only one capable of stepping in to take his place during the tour without anyone really noticing. Will is in rehab and no one really knows that Matt's the one onstage except for Trevin Jacobs, the S2J's leader and Will's closest friend. Matt knows he should keep Anya distracted so that all she's able to come up with is a fluff piece, but he's the one who ends up distracted by her. These two teenagers begin to fall for one another, but will Matt still feel the same way when he realizes that Anya needs to dig up dirt on him?

Yep, I admit it. I love me my boy bands. From the Beatles to One Direction, it's difficult for me to resist a pop song that either gets you shaking your tushy to the beat or singing along to the lyrics. And now I find myself hooked on a series about a fictional boy band! We started with Miles Carlisle and Aimee Bingham, then had Ryder Brooks and Mia Reyes, followed up by Trevin Jacobs and Daisy Miller. While each story is has one member of S2J falling for a girl, there's something different about each book, so it's not as if you're getting some recycled famous boy falls for regular girl trope. What was exceptionally fantastic with this fourth one was that it had an unexpectedly more mature and drama-driven story.

Both Matt and Anya are facing circumstances that they need to make the most out of because the results will affect not just their own futures but those of others around them. Matt knows that if the band's ass of a manager ever finds out Will's gone AWOL, even if it is for a valid reason, their mother could be sued for breach of contract. Anya needs a breaking news-type of story that is more than just about bubblegum pop music because it'll give her the chance of no longer being homeless plus help a close friend of hers who needs to get off the streets as well. They're both great characters with a lot of heart because they aren't thinking of themselves. It becomes a case of putting yourself or the one you love first.

There's something irresistible about this series and I've enjoyed the first four books and I'm anticipating the final release, which I'm going to assume will be released sometime next month. There may be different authors but the books are still able to somehow interconnect seamlessly. The series has yet to disappoint and with Nathan's story the only one waiting to be told (I suspect he's going to have a girl named Abby as his love interest), I highly doubt the series ever will disappoint. Now, for those who were excited to get Will's story and may feel bad that it's actually about his twin brother, no need to fret! Will is in the story and he is partnered with his own intriguing gal. Anya and the Shy Guy gets five stars! ♥

Pre-order Anya and the Shy Guy on Amazon | B&N | Kobo.