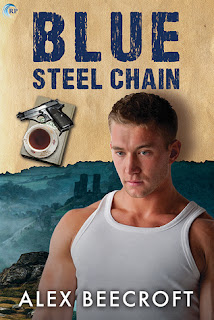 Aidan Swift was only sixteen when an older man supposedly saved him from an unknown future. Eight years later, Aidan's future looks bleak if he chooses to remain the victim of his self-proclaimed savior turned abuser and tormentor. He doesn't know where he would go if he were to leave nor does he have the courage to actually do so, filled with fear at what would be done to him should he get caught. He does, however, find solace at the Trowchester Museum, a peaceful place that reminds him of his love of art. It is there that he meets archeologist James Summers, a man who is also stuck in a relationship with a rock star whose indiscretions are plastered all over the tabloids but are adamantly denied. Both Aidan and James will have to set themselves free from the lives they lead now if they hope to live a far happier one together.

Blue Steel Chain is the third novel in Alex Beecroft's Trowchester Blues series and is an M/M romance between Aidan Swift and James Summers, two men who feel trapped in their respective relationships but find love and courage in each other. Aidan has been the victim of domestic abuse for years and has been molded into someone he no longer recognizes each time he stares in the mirror. Meeting James sparks something in him and while Aidan is afraid that his boyfriend will find out about his friendship with James, it is borne of his fear that his boyfriend may harm James. On the other hand, James has been in a non-exclusive relationship with a rock star but has grown tired of it. He's drawn to Aidan but he also realizes that the man's home life is one filled with horrors and is ready to step in to help whenever needed.

The story is told in two parts: Aidan and James while Aidan continues to live with his abuser and Aidan and James after Aidan is taken away from his abuser. Even after everything he endures at the hands of his boyfriend, there's still something innocent about Aidan, and it could have to do with the fact that his innocence was stripped away from him early in their relationship. Once he leaves the home he shared with his ex, Aidan has to adjust to life without being told what to do, where to go, and who to talk with. It's also an adjustment for James, who desperately wants to take care of Aidan but has to settle his own relationship woes and is advised by friends to give Aidan space to grow. Getting to an ending that had these two mutually happy was definitely a journey riddled with difficulties but was seeming worthwhile.

There's also Aidan's asexuality that affects the growing romance between the two, a topic is delved into more in the last quarter of the book. This was a first for me, since I've never encountered either a major or minor character in any book that I've come across that was asexual. It was definitely an interesting and original aspect to bring into a lead character's personality and it got me thinking if a long-term, committed relationship with someone who was asexual. I liked that this book gave me something new and different, allowing me to see things from a fresh perspective and inspiring me to want to learn more about asexuality. As always, Alex Beecroft has created a thought-provoking story and memorable characters with Blue Steel Chain and I encourage readers to check out the Trowchester Blues series. This gets 4.5 stars. ♥