Review: His Love by Jennifer Gracen (Summer in New York #3) 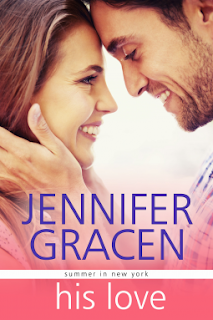 Note: This ARC was provided by Tule Publishing via NetGalley in exchange for honest review.

His Love by Jennifer Gracen is the third book in the multi-authored Summer in New York series and focuses on Dr. Gavin McKinnon, brother to Sean McKinnon from the All I Want for Christmas book in the Christmas in New York series. Gavin is spending his month-long vacation in New York and plans to enjoy soaking up the sun in Long Beach and catching up with his two siblings living stateside, Anna and Sean. When he meets his sister's housemate, Toni Westmore, he's immediately attracted to her and soon it's clear that the attraction is mutual. With Gavin only being around for a month, he and Toni agree to summer fling. But what happens when a few weeks leaves them both wanting something to last a lifetime?

This was a simple but heartwarmingly sweet love story about two people who have both experienced pain courtesy of their last long-term relationships and decide to jump into a month-long fling with no strings attached. But as is the case with a lot of these seemingly temporary situations, real feelings develop and it becomes a matter of both parties needing to be honest and wanting the same thing. The whole idea of Gavin's sister not being happy about her brother and one her closest friends getting together is nixed pretty quickly and I'm glad that it didn't really come into play because then it would have just felt like other falling-for-the-best-friend's-sibling/falling-for-the-sibling's-best-friend story lines already in the market.

Toni's job frustrates her but she continues going because she doesn't think she could do any better. This stems from her own insecurities brought upon her last boyfriend and the fact that her own mother incessantly gets on her case about not meeting expectations. Gavin is more secure professionally, knowing what it is he wants to specialize in, but his four-year relationship left him unsure about the choices that he's made personally. Between the two, it's obvious that Toni is the one who's life would be more flexible in terms of accommodating changes, but with feeling as if she's never going to be good enough, she's stuck living a life that's all about mediocrity and making do with whatever comes your way or is handed to you.

While there was a time or two that I felt Toni allowed herself to fall into the trap of getting stuck in neutral, she was a likable female lead character. As for Gavin, goodness, what a sweetheart he was! When Toni was hedging about making a decision, my heart broke for him because you could see that he seriously wanted to make a go of their relationship and went above and beyond to help her out. That's why I totally understood why the ending was the way it was because you can only do so much of the pushing and pulling and the next move seriously needs to come from the other party. All in all, this was a lovely story and sets itself apart by not employing too many of the characters from the previous series. Four stars for His Love. ♥

Purchase His Love on Amazon | Kobo.