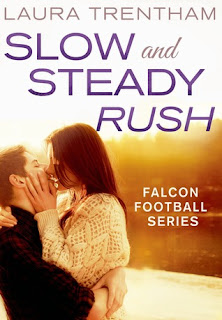 Slow and Steady Rush is the first book in the Falcon Football series from author Laura Trentham and is set in the town of Falcon, Alabama where football is the one that unites the townsfolk. Research librarian Darcy Wilde left Falcon after graduating from high school and only returns to visit her beloved grandmother and the cousin who is more like her brother. Now, duty calls after her grandmother's surgery but she isn't exactly looking forward to spending several months in the town that spends way too much time gossiping about her estranged mother's wild child ways and whether Darcy will follow in her footsteps. She's always made sure to live her life in the straight and narrow but when she meets the high school's new football coach and her cousin's best friend, Darcy finds herself ready to give into temptation.

Falcon, Alabama is beginning to feel like home to war veteran turned football coach Robbie Dalton, but he knows that if the team doesn't pull in a sufficient number of wins, he's going to find himself out of a job and a place to call home. He likes working with his best friend and checking on his elderly neighbor, but when he meets his best friend's cousin and his neighbor's granddaughter, Robbie is surprised to find that she's nothing like the girl he pictured in his head as his best friend shared her letters while they were stationed in Afghanistan. He's more than attracted to her but the fact that she's leaving for the life and job she left in Atlanta, Georgia after her grandmother recuperates stops him from pursuing anything with her. Will Darcy and Robbie realize that what's happening between them is the real thing before it's too late?

Goodness, I couldn't help but fall in love with the town of Falcon and this sweet and sensitive story about two people trying to find their way home, only to find it in each other. The title speaks for itself because there's absolutely nothing rushed about Darcy Wilde and Robbie Dalton's love story. There are shared moments where I couldn't help but snicker and shake my head and then moments where I found myself getting teary-eyed. I wish I could list down all my favorite moments in this review but then that would be spoiling the overall experience for those who have yet to discover the joy that is this book. Suffice it to say that this was small town romance that was big on emotion and even though nothing was rushed, it was far from boring and I found myself not getting enough of the very quirky but memorable cast of characters.

This was such an excellent beginning to a series that I have a feeling will quickly become a favorite. Readers are introduced to the town and what makes it tick, as well as its people, some of whom stood out more than others. There's Darcy's cousin and Robbie's best friend Logan Wilde, who was with Robbie in Afghanistan and is also an assistant coach on the football team as well as a budding restaurateur and Miss Ada Wilde, Darcy and Logan's grandmother who took them in when Darcy was abandoned by her mother and Logan by his widower father, respectively. Of course, a special shout-out goes to Avery who was a dog that stole the spotlight time and again and who had me shedding a tear in chapters sixteen and seventeen. I'm highly recommending Slow and Steady Rush for your weekend read and give it five out of five stars. ♥