Review: Against the Wall by Rebecca Zanetti (Maverick Montana #1) 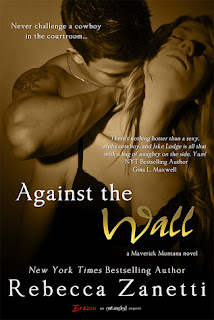 Landscape architect and designer Sophie Smith is in Maverick, Montana to pitch her company's design for a golf course, a plan that's meeting a great deal of opposition from the local tribe and other groups. The tribe's lawyer is the very same man who swept her off her feet while he was atop a horse and while he certainly looks good in both cowboy attire and a suit, Sophie knows Jake Lodge is a force to be reckoned with. Their mutual attraction and his family's matchmaking efforts aren't exactly helping matters either, but with their backs against the wall and on opposing sides, not everyone is going to come out a winner.

Against the Wall is the first book in the Maverick Montana series from bestselling author Rebecca Zanetti with each of the books set in the town of Maverick, Montana. Jake Lodge is a successful lawyer known for his prowess in the courtroom and now he's up against a development group seeking to put a golf course in an area that his tribe doesn't agree with. He doesn't expect to come up against someone like Sophie Smith, the golf course designer, and while he may be attracted to her and a tad distracted by what's going on between them, he also knows that it's important that the developers not be granted permission to build.

The city girl falling for the country boy is a familiar story line in the romance genre, but the author has put in the interesting twist of these two going to battle over a proposed golf course. Even as they start acting on their attraction, the fact remains that what they have is temporary because Sophie's a born and bred city girl and Jake refuses to leave his family and his heritage behind yet again for the city. Jake being a widower with a young daughter doesn't affect his relationship with Sophie, but his late wife died as she was leaving him and their child to live in the city that has Jake wary of becoming too involved with Sophie.

The love story itself felt like it was more about the attraction and lust that was going on between Jake and Sophie for majority of the book, though I do think there feelings evolved around the last quarter. There's a fair bit of matchmaking that happens and most of the community of Maverick appears to take a keen interest in the lives of the Lodge-Freeze siblings. Jake's family is composed of scene-stealers and his brothers and sister all appear to be kind of people that will have interesting love stories as well. Against the Wall was a good start and it makes you look forward to reading the rest of the series. Four stars! ♥

Purchase Against the Wall on Amazon | B&N | Kobo.