Review: Focus on Me by Megan Erickson (In Focus #2) 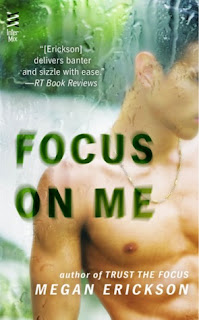 Note: This ARC was provided by Penguin Group (Berkley, NAL/Signet Romance, DAW) in exchange for an honest review.

"Why'd you come back?" I asked, my voice hoarse.

He met my gaze and blinked. "Because you're the first person in a long time to make me feel anything. And because I want you."

Colin Hartman is headed back home to North Carolina from California after flunking out of college and losing his football scholarship. It's just another thing to add to his growing list of failures, but at least he's got a job at the restaurant his family owns waiting for him. When he meets a guy stranded at a gas station who looks like he just stepped off a runway at a gas station, he can't help but offer the guy he nicknames "Catwalk" a ride. Soon, Colin finds himself on an unexpected journey with someone who evokes thoughts and feelings that he's never experienced in his life. But there's more to his passenger than meets the eye.

Riley Sorenson has left behind the life he's led for five years to find something that's missing within him. Getting a ride with the gorgeous guy who looks like a jock was a surprise but he's even more taken aback each time he suggests a destination and his driver agrees to not just take him but to actually join him. Colin is the first person to make Riley feel anything in years and while their time together is almost like a godsend, there are things that Riley has yet to tell Colin, things that could change the way Colin sees him now. When Riley's secrets come out, will the journey they're on come to an abrupt and heartbreaking end?

I didn't think it possible to surpass the extraordinary reading experience I had with Trust the Focus, the first book in Megan Erickson's In Focus series, but that's exactly what happened with the sequel, Focus on Me. I went into this second book filled with reserved anticipation because my expectations were very high but I wanted to be realistic about them since I know how it feels to be disappointed when it comes to sequels. But Megan Erickson has done something special here--she's created a story and two lead characters that stand proudly on their own while still having ties to the remarkable book that came before.

Riley Sorenson and Colin Hartman are two strangers whose paths intersect in the most unlikely of ways. Each one is on a journey of sorts, trying to find meaning in their lives and figuring out where they fit in the world. When they end up combining their respective journeys, it becomes a life-changing trip that will have them discovering a sense of purpose. It's almost as if their lives have been leading to a dead end, with neither of them really going any place else; but that one meeting at a Nevada gas station set them on a course to something neither of them had planned for but a change in course they both desperately needed.

The two lead characters are heartrendingly beautiful characters that I found myself becoming heavily invested in all throughout the story. Riley and Colin are perfect in their imperfection and while they may be damaged, it's only a small part of what makes them uniquely easy to empathize with. You don't have to suffer from what Riley is going through nor do you have to have failure upon failure like Colin to understand what they've undergone. We all know how it feels to have not met expectations, whether or own or someone else's, and we've experienced losing hope and simply wanting to give up and walk away.

Life doesn't always give us easy resolutions to the troubles that plague us, and we may stumble more times than we'd prefer on our respective journeys in life, but it's being and staying on the journey that counts. Sometimes, we may have to change directions midway and sometimes, we may have to be on our own, but as long as we find our way and realize that we're never truly alone, the journey will always be worth taking. Focus on Me has brought those realizations into sharper focus and Riley and Colin have shown that a change in focus is sometimes needed in order to take the next step. This 2015 favorite gets five-plus stars. ♥

Read my five-plus-starred review for Trust the Focus.