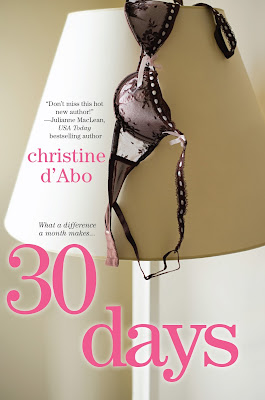 About 30 Days
For years, Alyssa has been going to bed with a memory. Is she ready to wake up with a fantasy?

Some people wait their whole lives to find their soul mate, but not Alyssa Barrow. She met Rob at sixteen, and they were set to live happily ever after—until he became ill. In his final days, Rob urged his beautiful, young wife not to abandon happiness—or pleasure. He even left her a special gift, a sexy game plan to help her move on: Thirty cards with instructions for thirty days of passion. You’ll know when the time is right, he’d said. Now it’s two years later, and when Alyssa meets her hot new neighbor, Harrison Kemp, she begins to think the right time is right now…

From his sculpted thighs to his devilish grin, Harrison is the kind of man women want. Before she can lose her nerve, Alyssa tells Harrison about her long-ignored cards…and asks him to help her fulfill them. It’s a favor he’s more than happy to, um, perform. With his skillful touch, and the hot press of his lips against her skin, Alyssa finds herself re-awakening to life—and a host of other sensations. But what began as not-so-innocent fun soon grows into true intimacy, and Alyssa realizes she’s opening herself up not just to sex…but to love. When it comes to a future with Harrison, what’s really in the cards?

Saucy, heartwarming, and insightful, 30 Days explores the agony—and the ecstasy—of starting over, and how a little encouragement, and a little courage, can go a long way…

Read my -starred review of 30 Days. 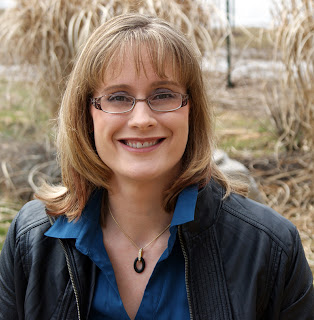 Christine d’Abo is a romance novelist and short story writer, with over thirty publications to her name. She loves to exercise and stops writing just long enough to keep her body in motion too. When she’s not pretending to be a ninja in her basement, she’s most likely spending time with her husband, daughters, and her two dogs.

Excerpt from 30 Days
Being on my own was . . . strange. Rob had been gone nearly two years and I still found myself turning to say something to him at the weirdest times. Though over the past month that started happening less frequently. I couldn’t tell you exactly how I felt about that. Guilty? Oh my God yes. But I knew it meant I’d finally started to move on. I hadn’t told anyone about my mental shift. Instead, I found myself going to this quiet place in my head, speaking less, observing more. It was different. I guess I’d become different more out of necessity than any real desire to change.

We’d known his time was coming to an end and took the last month of his life to simply enjoy each other. It was on one of our various trips to the beach that he handed me The Envelope.

“What’s this?” My fingers were damp from the ocean spray and sticky from the ice cream I’d just finished. “If this is some death letter thing, I can’t read it.”

He grinned at that. “Naw, it’s not sappy or anything. But yes, it’s for after I’m gone.”

“Lyssa, listen to me. I promise you it’s not what you think.” He huffed, puffing out his shallow cheeks. “How many guys have you slept with?” The breeze moved his shirt and the sun made his brown eyes sparkle. If he had any hair left it would have blown from his forehead. My heart ached to run my hands through his hair once more. “And if you say more than one I’ll promise not to be pissed.”

“Don’t be an ass. You know you’re the only man I’ve ever been with.” We’d talked a lot about that after we’d gotten married. Rob had a small measure of guilt that I hadn’t had a chance to sow my oats. Somehow he thought because of my limited dating experience I would get bored or grow to resent him.

“That’s my point.” He took my hand and pressed the envelope into my palm once more. “Don’t open this until you’re ready. Hell, you might not want to open it at all. Just . . .” He gave my hand a squeeze, but for the first time in a long while, he couldn’t meet my gaze. “I know you said you didn’t think you’d want to be with anyone else.”

“Baby, you shouldn’t be alone. You have too much light and love inside you. The thought of you being on your own, of not having anyone to share in the joy you have to give? No. I know you. There will come a time when you’ll realize that you’re ready to move on—”

“—and I know you’ll feel guilty about that. You’ll ignore the feelings for as long as you can, thinking that you don’t need anyone. Then something will happen. You’ll see someone and in that beautiful brain of yours you’ll be all nice ass, dude, and that will be it. You’ll cry about it but you’ll realize you’re ready.”

“Please. I wouldn’t cry.” Because it wouldn’t happen. Ever. “Not over a nice ass.”

He chuckled, finally looking me in the eye. “You’ll cry. But then you’ll remember this conversation and know that I was right. So I’m going to say I told you so now. Then I want you to take this envelope and open it.”