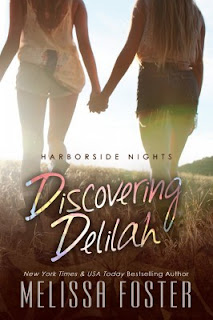 It's a quick kiss.

A kiss that lasts only three seconds at most.

It's a kiss that makes the earth shift beneath me.

Discovering Delilah is the second novel in the Harborside Nights series from bestselling author Melissa Foster and is about two friends, Delilah Armstrong and Ashley Carver, who need to decide if they're ready to take the risks necessary to take their friendship and make it something more. Delilah may be going through the stages of grief but the one that she keeps going back to is the anger she feels toward her deceased parents, anger that quickly morphs into guilt. It's that very feeling that prevents her from being able to pursue anything with the girl who's made her wish she were courageous enough to do so: Ashley.

Delilah's issues regarding her sexuality and being more open about it stem from the fact that her parents, especially her father, have always made it clear that they were not supportive of same-sex relationships. On the day she finally came out to them, her parents died in a car accident just a few hours later, so not only is Delilah dealing with the anger because her parents didn't support her being a lesbian but she's also saddled with the guilt brought on by thoughts that she may have played a role in the accident that took their lives. Only her twin brother Wyatt and their best friend Cassidy Lowell know about her sexuality.

The one person that Delilah wants to come out to is her friend Ashley, but it just so happens that Ashley is also curious about Delilah's sexuality. You see, Ashley is a lesbian and she's been feeling the same kind of connection that Delilah's had toward her since they met. Unfortunately, as close as these two are, the conversations they have never really turn toward both having feelings for each other and about being lesbians. Even after it's established that they want to be more than merely friends, Delilah is hesitant about fully coming out and Ashley's already had her heart broken by someone who kept her a secret.

One of the best things about this book was it's ability make this truly feel like a journey for both Delilah and Ashley. Delilah has to be honest with herself and, at the very least, those closest to her because trying to pretend to be someone you're not is the kind of dishonesty that could break your spirit. She's experiencing many things for the first time and she's still trying to find her footing. On the other hand, Ashley has to practice patience when it comes to being with someone like Delilah and trust that, in the end, it will all be worth it. The risk of getting hurt is always there but the love they have makes it worthwhile.

This is a book about being true to yourself and being able to be comfortable in your own skin. Having the rest of the world reach that same comfort level is secondary. There's also a difference between accepting someone for who they are and merely tolerating them. Yes, I know tolerance is taught in homes and schools, but why teach that when acceptance is something that is a far more valuable virtue to instill in everyone? Discovering Delilah is about falling in love with yourself and with someone else and realizing that true family and friends will accept you for who you truly are. This 2015 favorite gets five-plus stars. ♥