Review: Proposing to Preston by Katy Regnery (The Winslow Brothers #2) 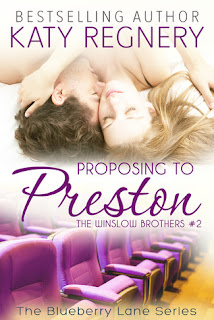 Preston Winslow should be concentrating on preparing for the bar exam, which he'll be taking in both New York and Pennsylvania, but he finds himself distracted by a stage actress named Elise Klassen whose beauty and talent captured his attention during a play that was best forgotten. She makes no secret of the fact that acting is the most important thing in her life, but Preston's love is actively competing to take over its place. They both commit to making a go of their relationship, but when she gets an offer to take her talents to Hollywood, Elise chooses between the man and the work that share her heart and ends up breaking hers and his in the process. Two years later, Elise realizes the mistake she made but is it too late for her to reclaim the only love that's ever mattered and the only man who's ever meant anything to her?

Proposing the Preston is the second novel in the Winslow Brothers series from bestselling author Katy Regnery and turns the spotlight on the second oldest brother, Preston, and his love affair with Elise Klassen. The story is split into two parts with the events in New York followed by the events in Philadelphia two years afterward. When they first meet, Preston is in the middle of an internship in a law office while prepping for the bar exam while Elise is a struggling stage actress. When they see each other again after everything that happens in New York, both Preston and Elise have achieved success in their respective fields, but for all their professional accolades, their personal lives have languished. The blurb did not prepare me for where this story was headed, but it was more than worth the trip it took me on.

Preston Winslow is the kind of man who loves with his whole heart and would do absolutely anything for the woman who owns his heart. When he meets Elise Klassen, he knows there's something special about her and their love affair in New York changes both their lives. I'll admit that my affection was reserved solely for Preston, and it could be due to the occasional bouts of frustration I felt toward Elise. How could you not fall totally in love with Preston and want to spend the rest of your life with him, knowing how caring and supportive he was? Elise making the choice she did in New York was heartrending and her unexpected return to his life two years later had me thinking for a minute that she didn't deserve a second chance with him. But hey, if he made her work for it in New York, turnabout is fair play in Philadelphia.

I absolutely love how Katy Regnery made this a story of true love and how the lead characters find it with each other the first time around but allowed it to get away and fight for it when fate throws them in each other's path two years afterward. Readers get to experience both times with Preston and Elise and it's difficult to not feel the anticipation and frustration while they're in New York and then the hesitance and hope when they're in Philadelphia. I also like how this sequel and its predecessor highlight the role family plays in the lives of its characters. Bidding on Brooks set the bar high and there's no doubt in my mind that Proposing to Preston more than raised it for the next one in this fabulous series. Five out of five stars. ♥

Purchase Proposing to Preston on Amazon.