Review: A Touch of Chardonnay by Pamela Gibson (Love in Wine Country #2) 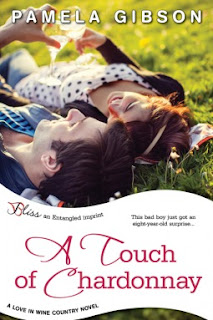 Lindsay Reynoso is close to having enough money saved up to purchase a condo that will allow her and her eight-year-old son Nicky to move out of her parents' place and have a home of their own. All she has to do is to finish up her latest evaluation on a home in a coastal town in California. When she finds out that the development company that owns the property is headed by Christopher Brandt, she's filled with anger. The last two times she tried to get in touch with the retired tennis star, she was turned away by people closest to him. Now, she's forced to work with him, and while he may be in a rush to tear down his former family home, Lindsay has every intention of taking her time and making sure she files a detailed report.

Chris Brandt takes one good look at the cultural archaeologist assigned to his property and can't shake the feeling that she looks familiar. He soon realizes that they spent one night together nine years ago while they were both in college. While he wants her to get her report over and done with so that he can get on with building a new home in place of the family residence that holds bad memories for him, he also wants to spend time with her and hopefully pick up where they left off years ago. He believes that Lindsay is a person that values honesty and trustworthiness as much as he does, but once she tells him the secret that she's been keeping from him, he may change his mind and decide she's like the other women he trusted.

A Touch of Chardonnay is the second novel in the Love in Wine Country series from Pamela Gibson and turns the spotlight on Lindsay Reynoso, a cultural archaeologist and single mother, and Chris Brandt, a property developer and former tennis star. The story has a bit of a second chance romance feel to it, though the only real interaction between Chris and Lindsay prior to the present was sleeping together nine years prior, one moment that resulted in a son named Nicky, one that Chris never knew about but Lindsay assumed did since she informed his then-manager and, a second time, his then-wife. She, of course, quickly realizes that Chris has no clue he even has a child but instead of telling him right away, she hedges, allowing her fears that he'll take Nicky away from her to get the better of her. There are certain times that she doesn't feel it necessary to inform him at all, which didn't sit well with me, since I'm a firm believer that every party involved in creating a child should know of the child's existence and take responsibility.

While the first book was just okay in my eyes, I liked this second one way more, trying to understand where Lindsay was coming from with her indecision when it came to informing Chris of their son and empathizing with Chris as he the secret was revealed to him. The pacing of the story was good up until the last two chapters where it suddenly felt as if the hyper-speed button was pressed and everything felt rushed. I noted that this second book also had that much awaited three-worded sentence said only once by one of the main characters. Now, I don't require my romance novels to have that sentence in the text and I have enjoyed books that don't have them at all, especially since those stories involved a couple in the early stages of their relationship where they're still in like instead of in love. I guess I'm just one of those people who thinks you either say those words or you don't, but don't have just one character uttering them because then it feels one-sided. Still, I enjoyed A Touch of Chardonnay and I'm giving it four stars. ♥

Purchase A Touch of Chardonnay on Amazon | B&N | Kobo.